It was thirty years in the making, but the new road to the coast is finally open in Costa Rica! If the world ends in 2012 as the Mayans predicted, then at least we have two years to zoom back and forth between the crowded Central Valley and the open space of the hot central Pacific coast of Costa Rica. This road has been talked about for so long in Costa Rica that it became legendary long before any of its asphalt was mixed.

“It’s going to take thirty minutes to get to the coast from San Jose”!

“THE ROAD is going to have four lanes the entire way”!

“It will be like taking a thruway in the states”!

“It will be a straight route to the coast”!

“I can see a Royal Flycatcher half an hour after leaving San Jose”!

Ok, that last one was what I had been thinking but in any case, all of us in Costa Rica have been very excited about the opening of the road. In fact, we were so excited that Janet Peterson (a fellow birding friend) and I decided to check out the road last Sunday.

We weren’t the only ones.

Even though we left pretty early, a variety of cars joined us to check out the new road. There were old, slow cars born in the 70s that like mechanical family patrons, carried entire families to the promising coast. There were new SUVs that zoomed along like tanks (and like tanks threatened to drive over the older, slower, smaller vehicles). There were small buses filled with local tourists as well as what appeared to be school buses (because of their size and the fact that they were filled with students). Taking into account the number of break-downs, it was apparent that a lot of these cars hadn’t been out of the garage or front yard for some time. It was one last hurrah for them before heading to the junkyard I suppose.

Translated from the mechanical Spanish, “Please, just one last trip along the new road. I just want my tires to experience one last smooth, pot-hole-less ride before I blow a final gasket (cough, cough)”.

And translated from regular people Spanish, “Ok, let’s take the car for a spin. The road is open”!

“But dear, that car doesn’t even work”!

“Sure it will! I’ll just pour in some water here, a bit of oil there, fill the tires, toss some Salsa Lizano into the tank for good measure and off we go! And if it does break, let it happen on the NEW ROAD”!

And so it did happen. On January thirty-first, many a car let out it’s last gasp of exhaust along the road to Caldera in the form of a black cloud that said farewell and enjoy the tolls…

Yes, tolls, not road. Well, the road can be enjoyable but the tolls sure aren’t. That sort of torturous, constant stopping and going in the tropical heat is probably what did in the older vehicles. From San Jose to Orotina, for a distance of fifty kilometers at the most (that’s thirty miles for us anti-metric Americans) there are at least four different tolls that I recall that will leave you about 2,000 colones lighter. Although it’s a sneaky rip-off that most tourists won’t mind, locals who live near the new road aren’t very pleased (especially because there are few to no options in some areas).

To get to the coast fast for my Royal Flycatcher fix at Carara, I actually don’t mind shelling out those colones but I DO mind having to wait in line at the toll booths. Even though the traffic didn’t seem too bad on the way down to Carara, we were still twiddling our thumbs and wondering why they built so few lanes for the tolls. That wasn’t so bad but on our way back later that same day, the new road was a congested mess because of the toll booths and sections of the road that only had two lanes. The lines were too long for mere thumb twiddling. No, we felt as if we were aging while sitting there. If there would have been birds to look at, we would have been OK but that just wasn’t the case. 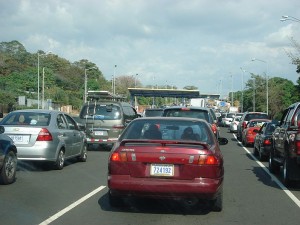 So, to sum things up about the new road and in answer to all of those expectations, despite thirty years of planning, it seems that the planners forgot to design the road for the amount of traffic it will get. If you go early in the morning, it will be a comfortable, quick trip that does more or less goes straight to the coast. BUT, it doesn’t have four lanes (it has two or three) so if you go later in the day, expect to have to wait at every toll booth and at some of the two-laned sections.

For birders who need to travel between the coast and San Jose, I suggest using the new road in the morning and the old, curvy, scenic road that goes through San Mateo in the afternoon. I took the old road the other day and it was a wonderful drive with hardly any traffic. Plus, you can stop along the old road at one of two cafes that have stunning overlooks and can be good for dry forest birds.

As for the Royal Flycatcher, we got more than a fix. Along the river trail in Carara, we were seeing them the entire time and one was even attempting to build a nest above the trail. 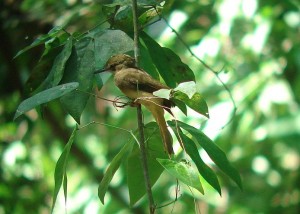 Other interesting sightings were Three-wattled Bellbird heard, Gray-headed Tanager, and the usual great variety of wrens, hummingbirds, and other flycatchers typically seen along this always birdy trail.

Took a day trip to Caldera/Puntarenas on Wednesday, 3 March to try out the new Autopista. No traffic, no hold-ups at the toll boths and the road is nice & smooth and features something not often seen in Costa Rica: shoulders!

Recommendation: use the Autopista mid-week to avoid family outing traffic to the beach.

[…] the Pacific Coast. We had to take the old, curvy road down through Atenas and Orotina because the new road is closed for three months (I was not surprised having seen the obvious possibilities for […]