I haven’t had the chance to go birding for the past two or three weeks. As of late, work, family duties, and lack of transportation (a common anti-birding trifecta) have combined their forces to stop any serious birding in its tracks before I even think of retrieving my binoculars. That’s alright though because I will be guiding a great group of people up at the Heliconias Lodge near Bijagua this upcoming weekend and I am always birding anyways in a subtle manner.

What I mean by this is that no matter where I go or what I am doing, I am always listening and looking for birds. I am sure that many birders can relate; especially those who have carried out field surveys that train one to listen for, quickly identify, and gauge the distance to every peep, squawk, and whistle that come a knocking on the ear drums.

Here is a run down of a typical day of subtle birding for me in Costa Rica:

5:00 – 8:00 a.m.: I awake to the dawn songs of Tropical Kingbirds and Social Flycatchers (and sometimes Gray-necked Wood-Rails). Rufous-collared Sparrows also sing their cheery songs from the walls that separate the houses and from the telephone wires and television cables. 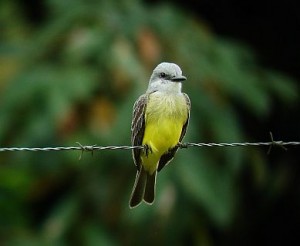 Tropical Kingbirds may be the quintessential neotropical trash bird but at least they are nice looking trash.

Through the back door, I watch the neighborhood Blue and White Swallows zipping by and upon opening the front door,  I hear a Plain Wren giving a simple song from a nearby hedgerow. About this time, some poor, captive White-fronted Parrot begins to scream and squawk from its cage in a neighboring house. I haven’t seen it but am pretty sure that it’s imprisoned because the calls only come from one location.

Around this time, wild and free Crimson-fronted Parakeets and White-crowned Parrots come flying overhead. As with most members of their family, I hear them long before seeing them.

Just after Miranda and I walk out the door, a pair of Blue-gray Tanagers give their squeeky calls as they fly overhead and White-winged Doves sing and display from the wires. Another Blue-gray Tanager and Tropical Kingbird perch in the bare tree near the entrance to our neighborhood and a Great-tailed Grackle or two flies by. 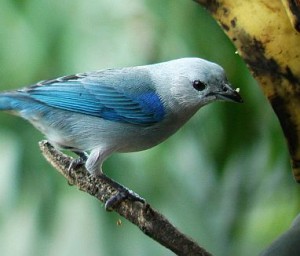 Blue-gray Tanagers are a common sight when birding Costa Rica.

Upon leaving our neighborhood, some Coturnix quail species calls from the house that also keeps canaries, budgies, and Yellow-faced Grassquits (all heard only). Near that house there is also a large garden and this green space provides habitat for Yellow-bellied Elaenia, Rufous-naped Wren, and other birds that I see or hear every time I walk by. More Tropical Kingbirds sally from overhead wires and a Boat-billed Flycatcher gives its complaining sounding call from somewhere in the neighborhood.

Students on their way to school walk by, we smile and wave at the old, smiling, mentally retarded guy who sits outside and listens to his radio all day. I always salute him with a tip of my hat to which he responds in like manner. As we pass through residential areas, we see more of the same birds and I sometimes hear a captive Black-faced Solitaire singing its ethereal song from inside a house. Miranda looks for cats and says, “meow” and sometimes points at birds and says, “peee”! (“bird” in Miranda O’Donnell Paniagua lingo).

Upon reaching the bus stop, Great-tailed Grackles become very evident as they loudly call from four tall palms. Miranda never fails to point up and say, “peeee”! and I likewise never fail to encourage her to call them, “birds”! or “grackles”!

I also look up at the palms and the nearby church with the outside hope of finding a Barn Owl. I suppose that the church bells are too loud to harbor one but judging by the frequency with which I see rats in Santa Barbara, there has got to be a pair living somewhere around here.

From the bus, background birding is poor with a few sightings of Tropical Kingbirds, Great Kiskadee, Hoffmann’s Woodpecker, Clay-colored Robin, and an occasional Blue-crowned Motmot hanging out in the shady riparian growth of a ravine. 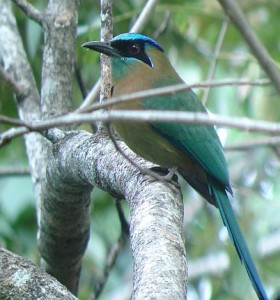 It’s nice to have Blue-crowned Motmots as a common backyard bird in Costa Rica.

After dropping Miranda off at the babysitter’s place in Tibas, I walk back to the bus stop to head back to Santa Barbara. Although Tibas is more urbanized, I often hear and see Grayish Saltators, Inca Doves, and get flyovers of Red-billed Pigeons.

By the time I get back to Santa Barbara, bird activity has slowed down and a dozen or so vultures soar around on the thermals rising out of a nearby ravine. Sometimes a Short-tailed Hawk is with them.

For the rest of the day, I just hear or see a few of the same birds as I write. Once in a while, a flyover Ringed Kingfisher announces its presence with its “check!” flight call.

Subtle birding is a good way to challenge oneself to find birds in urban environments when birding isn’t really the focus but I’m ready and looking forward to this weekend to get back out in the field for some concentrated Costa Rica birding replete with scope, camera, recording equipment, and a pair of good binoculars.

As you say Patrick, I think most birders are constantly on the lookout for birds and listening for calls is the most advantageous approach for success. I enjoy watching birds but hearing their beautiful songs gives birding great appeal especially if you are simply relaxing in your own backyard.

I can’t imagine the enticing sights and sounds of subtle birding in Costa Rica but I hope to experience the phenomenon, possibly this coming January. I’d love to watch a Blue-crowned Motmot on the veranda while drinking my morning coffee!

Yes, it’s such a bonus when one can relax with birds and coffee in the backyard. I am slowly birdifying our small backyard. It might be too small to attract motmots but I wouldnt be surprised if they showed up when there is enough vegetation to provide adequate shelter.

Glad to hear that you may come down to Costa Rica for birding in January. I can think of a few places where you might have that motmot/coffee experience. Let me know if you need help planning your trip.