From the second story of our house in Santa Barbara de Heredia, we can see the Talamancas rising up in the hazy distance off to the southeast and big, blocky Irazu with a slight turn of the head to the left. Volcan Turrialba lies hidden behind 11,000 foot Irazu but still makes itself known by broadcasting a daily cloud of smoke and vapor. Scanning further left and to the north, a forested ridge of peaks that are protected within Braulio Carrillo National Park dominate the scene. As mountains tend to do, they look so close and inviting that you start to think to yourself, hey I could just walk up there and watch birds! Skip on through the coffee plantations and riparian growth that cling to the edges of streams and rivers and head on up into the forest proper. Leave the asphalted oxcart paths and urbanizations behind for majestic oaks (they are tree royalty after all) and the vegetation overload of high-elevation, Costa Rican cloud forests. 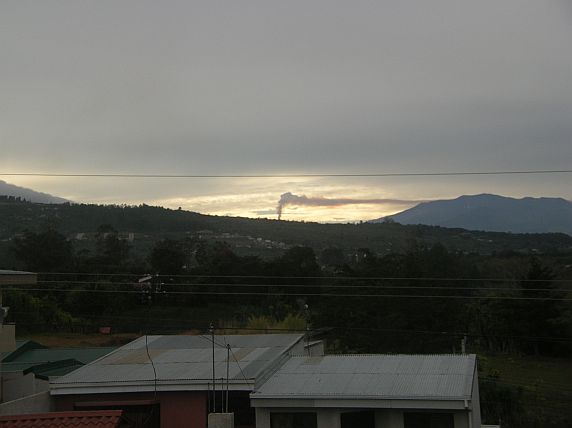 They look so close and no wonder because with Google Earth’s handy ruler, I just discovered that the peak of Volcan Barva is only 6 miles from my house as the Crimson-fronted Parakeet flies! This revelation is particularly astounding because it took at least 45 minutes to drive up there this past Sunday. The reasons for such a gross discrepancy between  distance and driving time are quite valid and also hint at why the Spanish didn’t bother very much with the mountainous areas of Costa Rica.

First and foremost, the broken terrain that is bisected and trisected by small streams that have somehow carved huge ravines out of the crumpled surroundings presents, as you can now imagine, some difficulty for overland travel. Paved roads and cars make it about a thousand times easier to go visit the abuelos (grandparents) for Sunday dinner compared to 50 years ago but travel times between places that are so close to each other still makes you feel as if you have entered some sort of slow motion timewarp or Tico tesseract. Travel in a straight line is strictly for the birds or Uraniid moths because roads are necessarily curvy and twisting affairs that wind their way up and down mountains. This makes for beautiful scenery but may also leave you feeling quite envious of moths, vultures, and other animals that can fly.

Speaking of roads, we can now contemplate the second reason why 5 miles up the mountain is better defined as 30 miles up the mountain. Before I start, though, let me say that roads have greatly improved in Costa Rica over the past 5 years. It’s true! There are fewer potholes and better maintenance of Costa Rican byways and the coastal highway makes it a breeze to travel in the Pacific lowlands. That said, the thing that keeps you from speeding along smoothly-paved mountain roads is that they were built for oxcarts. 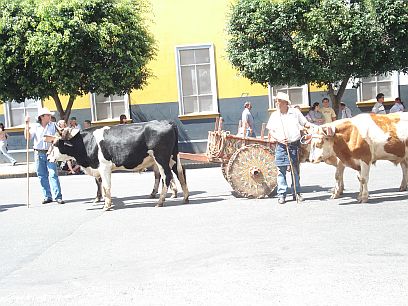 Tico oxcarts in a parade.

Those roads have been around for a while but they were just never meant for cars. This is why they have more than one lane but not quite two except at bridges when they are most definitely one-laned. I apologize if that sounds confusing but rest assured, if you aren’t entirely clear about that last sentence then you have an idea of what it’s like to drive these mountain roads. Because there is little room for two cars (and no shoulder) you have to drive at a more relaxed, careful pace, obviously so when sharing the road with vehicles headed your way.  It’s only harrowing if you go fast so to keep the peace with your heart rate and avoid an overload of adrenaline (not to mention staying alive), you make your way up and down the mountains in a leisurely, low-speed manner.

The skinny and winding nature of mountain roads in Costa Rica assures that travel is slow-going but it also makes the drive quite pleasant and allows you to spot birds like Blue-crowned Motmot, Blue-gray tanager, or Band-tailed Pigeon (just a few of the species I saw from the car on Sunday). Since distances are short, it doesn’t take too long to get from A to B. A greater problem, however, is presented by “traditional” roads that were never paved or who have allied with the elements to reject asphalt and literally shed their modernized surface for a return to old-fashioned, stony ways. These are the roads that require four-wheel drive and even then are better left to oxcarts, mountain-bikes, and lunar vehicles. Oh, they are also good for walking and this is exactly what you should do for visiting Barva.

The benefits of leaving your car at one of the houses that charges 1,000 colones (two bucks) for parking once you reach the end of the pavement are ample exercise, nice birding, and relief from wondering if an axle on your vehicle will snap in two.  I think it’s about a mile to the ranger station and the uphill hike passes through cloud forest patches, 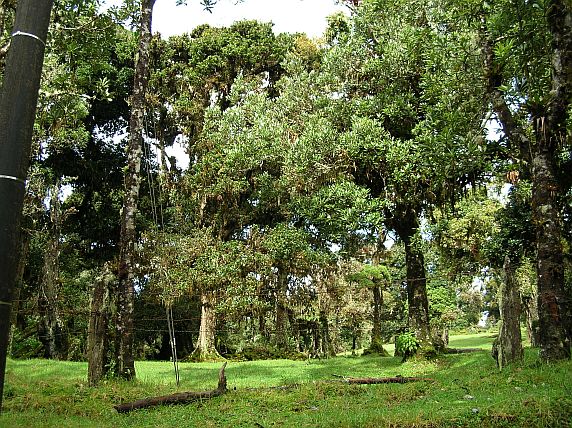 and nice forest once you pass the limits for the national park. You can see most of the bird species that occur in the area on the way up (including Resplendent Quetzal- I saw 3 on Sunday!) and the double whammy of less oxygen and uphill walking will fulfill your exercise requirements for the next two weeks. This will also assure that you stop more frequently which will in turn result in more bird sightings. 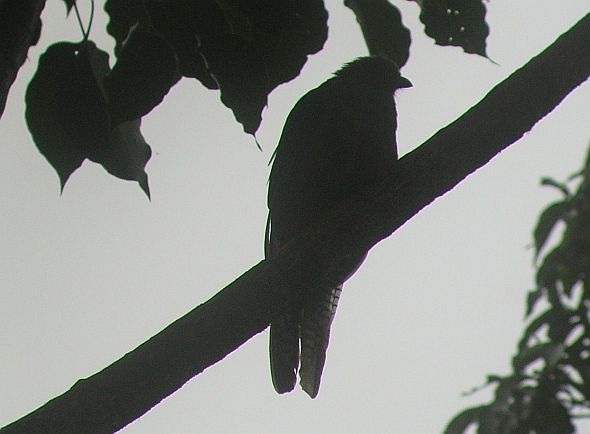 Misty weather made for silhouette photos of the quetzals- its profile reminds me of a cross between a pigeon and a raptor.

Once you make it to the ranger station, for the usual park fee of $10 (1,000 colones for residents), you can extend your hike even further to a high elevation lagoon or walk a beautiful trail that loops through old growth oak forest. Or, if you are tired of walking, just hang out in the peaceful glade at the ranger station and watch birds, meditate, practice Tai Chi, or have a picnic. Please don’t tarnish the place by doing a Sudoku however- those Japanese number puzzles should be left for the plan ride home or if you have to wait in line at a Tico bank. 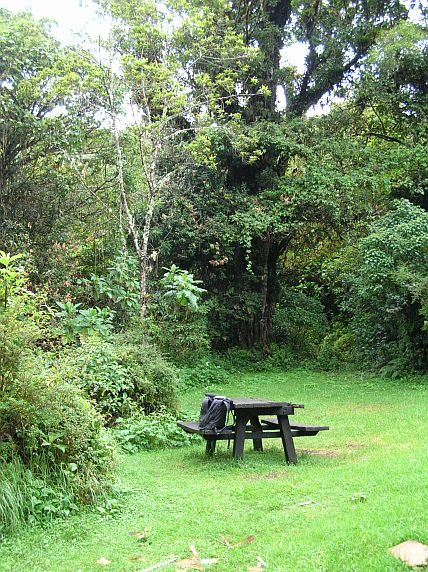 The peaceful and birdy glade at Volcan Barva, Costa Rica.

As of Sunday, there was one picnic table that could still be used (the high elevation bath of mist, rain, and fog has finally compromised the structure of the other one such that sitting on it is no longer an option) and most of the area’s birds could show up in the surrounding high elevation forest. 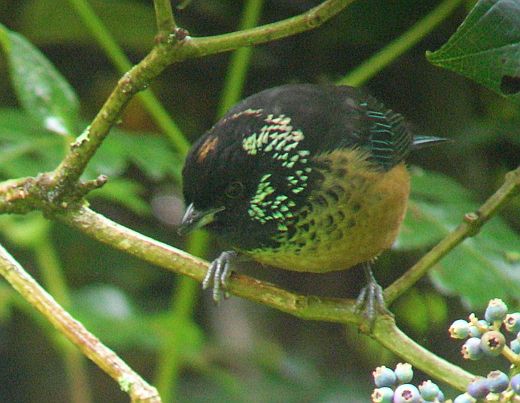 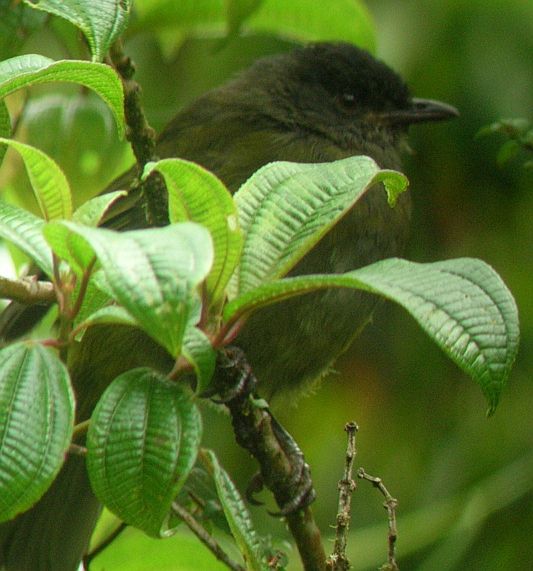 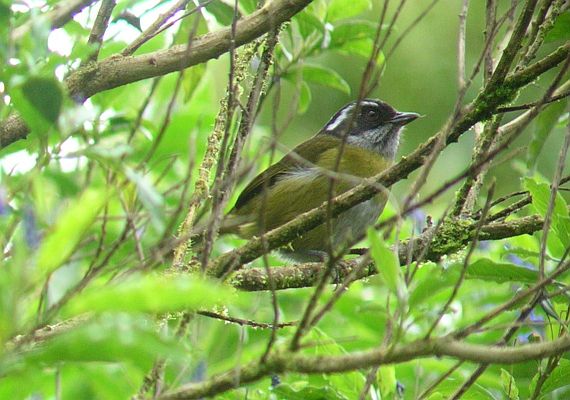 Yellow-winged Vireo- here placing a twig between itself and the camera to thwart my attempts at digitally capturing this relative of the Hutton’s Vireo (I’ll get its soul next time), 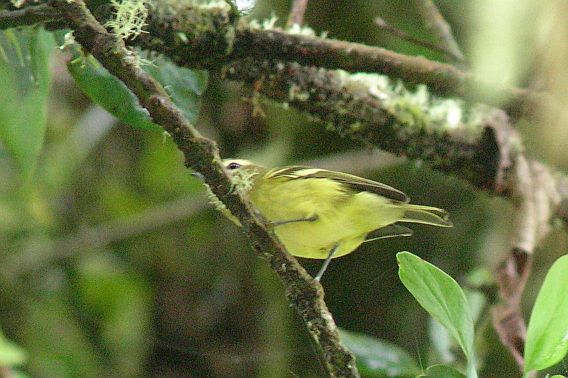 Flame-throated Warbler- look for the reddish spot in the photo to find this beautiful, hyperactive bird, 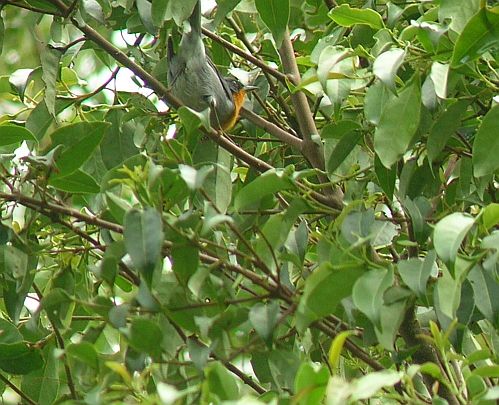 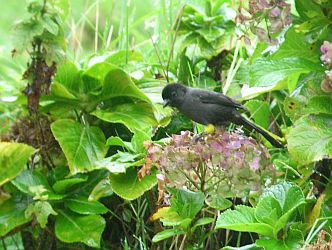 Spot-crowned Woodcreeper- the only woodcreeper up in here, 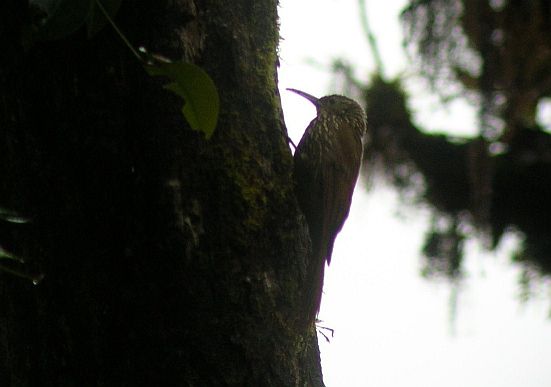 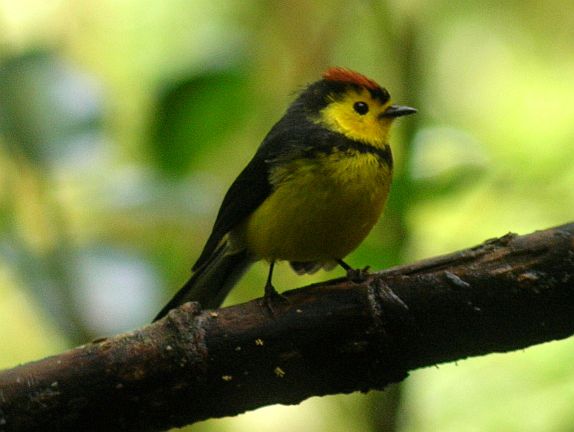 I didn’t walk up to Barva this past Sunday but will make the hike on my next visit because the final, unpaved section of the road is just too rough on the car. Trekking uphill with birding equipment will train me for future big days in any case and as I trudge my way up the mountain, I can also test my hypothesis that more birds are seen the slower one goes.

Most visitors birding Costa Rica probably won’t make it to Barva because the same species occur on the more easily accessible Cerro de la Muerte. It is ideal, however, for mixing hiking or mountain biking with birding.

Yes, it is nice up there and close to where we live too. The rough road to the best habitat must be hiked though. The area might hold some surprises as not many birders head up that way.