Cost Rica abounds with rivers, streams, rivulets, brooks, ravines, and glens. Even aquatic ecologists bound by profession to maintain strict definitions for bodies of water that flow down gradients would find all of the above and more in Costa Rica. The mountainous terrain and giant bucketloads of rain combine forces to fill the country with so much rushing water that they would probably feel obliged to come up with new terms to describe their observations.

“Dr. Perry, what definition would you give to this body of water? I can’t seem to find a definition for its clear, then muddy, then marshy appearance.”

“Yep! It’s one of those crazy tropical bodies of water that seems to defy an easy definition! Let’s call it a streamaswampus!”

“Ok, I noted that, have taken water samples, and pictures above and below water with the waterproof camera to document our find.”

“Great! Now back to looking for giant neotropical crayfish.”

While Dr. Perry and his trusty graduate students were marveling at tropical aquatic ecosystems and broadening the lexicon of their field of study, even if they weren’t looking for birds, they probably would have gotten the Costa Rican Riverbird Flush. This doesn’t mean that they would have contracted some unfortunate and frightening skin disorder. No, what I am referring to is seeing at least five bird species that are principally found on rivers when birding Costa Rica. These are the birds that make us stop at every bridge to scan the rocky shore with our binoculars, that encourage us march down steep sets of stairs constructed for viewing scenic waterfalls, and that even drive some of us to risk killing our digital cameras by picking our way upstream on slippery rocks until the feathered, riparian-loving quarry is glimpsed.

Three of these species are perennial favorites on target lists of birders visiting Costa Rica, the fourth is frequently overlooked as a possibility by North American birders because it is more commonly seen in the Rocky Mountains, and the fifth can be any one of a number of river-loving bird species that are practically a given when birding Costa Rica.

The Sunbittern is so strangely cool that even non birders should want to see it. Is it a rail? Some freaky anhinga thingy? How about a heron (after all it does have bittern in its name)? The Sunbittern is none of the above although it kind of looks like a mutant avian patchwork quilt of all of the above and more. Recent molecular studies have shown that its closest relative is the Kagu, a bizarre and very wanted bird species from New Caledonia that has also defied clear taxonomic placement since its discovery. The Sunbittern gets its name from the large, sunburst-like patches on its wings that it shows when excited or threatened. They can turn up along just about any river or stream that runs through humid forest in Costa Rica but are most easily and regularly seen on the Sarapiqui River near Puerto Viejo. In fact, this might be the easiest place to tick this bird away from the Llanos of northern South America and the Pantanal of Brazil and Paraguay.

Any birder visiting the Sarapiqui area has a very good chance of seeing this species if they just keep scanning the river during their stay. A boat trip should also do the trick but watching for it from the bridge at Chilamate will probably work. You should also see one if checking the river from such hotels as Selva Verde, Tirimbina, Chilamate Rainforest Retreat, or El Gavilan. On a recent trip to the Chilamate Rainforest Retreat, we spotted our first Sunbittern as it foraged on the other side of the river and then were spoiled by an individual that frequented the lodge’s football pitch and area right next to their cabins!

Unless they are standing on a football pitch (aka soccer field), Sunbitterns can be surprisingly difficult to spot because they tend to move slowly and carefully along the edge of the river and blend in very well with a background made mottled by shadow, river rocks, earthen banks, gravel, and sand bars. Watch especially for the white markings in their wings. 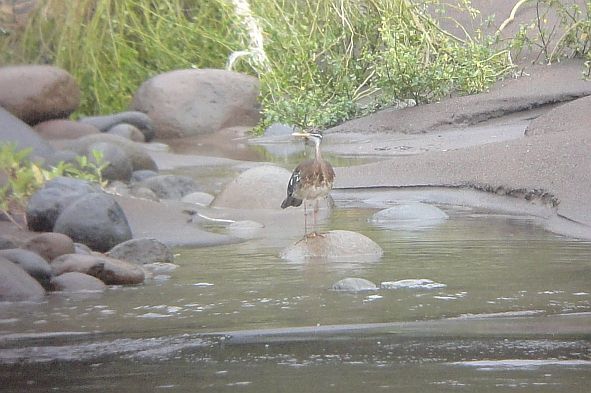 The one on the other side of the river. 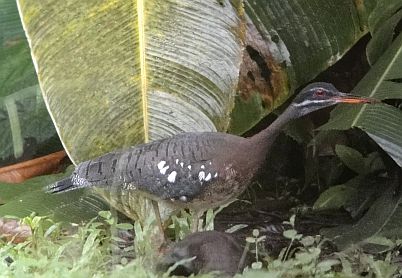 The unofficial mascot of the Chilamate Rainforest Retreat!

The Fasciated Tiger-Heron is also more easily seen along rocky sections of the Sarapiqui than at many other sites in its range. This species isn’t more common in Costa Rica than elsewhere, it’s just that birding guests at any of the eco-oriented hotels located along the Sarapiqui can sit around and watch the river until one moves through its necessarily linear territory. We also had one of these very cool herons while river watching from the Chilamate Rainforest Retreat. Like the Sunbittern, the tiger-heron also blends in amazingly well with its background. The one we recently had at Chilamate looked a lot like the gray river rocks when seen from behind (so much so that I never would have seen it without binoculars). Fasciated Tiger-Heron could turn up at any number of rocky rivers in Costa Rica but it seems to be easiest along the Sarapiqui.

Torrent Tyrannulet is the third of the five most wanted river birds in Costa Rica. like the other two esteemed species that crown a Costa Rican Riverbird Flush, this little flycatcher has a large range outside the country. In my opinion, it’s easier to see in South America and may have declined in Costa Rica in some areas but it can still be found at a number of in-country sites. You probably won’t see it while scanning the river rocks for the Sunbittern or tiger-heron around Puerto Viejo de Sarapiqui but could find it at any number of middle elevation, forested rivers. I recently got my 2011 bird along the Balsas River down the road from the San Luis Canopy.

The fourth bird species of the flush is the American Dipper. These plump, aquatic passerines are widespread along clean rivers of the Costa Rican mountains but are rather uncommon. You might see one while looking for the tyrannulet as they occur in the same sort of habitat. I was surprised to get one at Quebrada Gonzalez two years ago but regularly see them at Tapanti National Park and also recently had one on the same stretch of river as my 2011 tyrannulet.

Once you have the four more challenging species, getting the fifth is a far easier task. Just go out birding along any middle elevation stream or river in humid forested areas of Costa Rica and you will see Black Phoebe (a common and conspicuous bird at any time of the year), Lousiana Waterthrush (fairly common during the winter months), or at least a Buff-rumped Warbler (also common in the lowlands).

We aren’t even done with the first month of 2011 and I already have my Costa Rican Riverbird Flush. I hope this is a good portent for the year and a sign that I will reach 600 species by December 31st.

Hey,Pat – We’re missing the Tiger-Heron and the Sunbittern still. Maybe next trip…
We’ve seen many a Northern Waterthrush but not a single Louisiana Waterthrush. That bird may be harder than the first two!

@Steve- Yes, maybe next trip. They are never easy! I get Louisiana regularly on foothill and middle elevation streams but Northerns do seem to be more numerous in their respective habitat.

I would think that you would have put Sungrebe on the “Top 5 List”. It would be just below Sunbittern on my list.

@Bob- I left the Sungrebe off because it doesn’t occur along rushing-rocky rivers like the species in the article although I guess it should get an honorable mention because it’s a much wanted species that can be found along quieter, lowland rivers.

Wow Pat, I really, really want to get down there to Costa Rica. 600 species by the end of the year! Amazing. Obviously, the Sunbittern would probably top my list but there are several hummers I would like to see and numerous other species as well.

@Larry- Yes, lots to see down here! My year list is coming along so far. If I get in enough birding during migration and make it up to Guanacaste and down to the the southwest, I think I will have a good chance at breaking 600 for 2011.