Most birders visit Carara National Park in Costa Rica during the dry months of January, February, and March.  Those sunny months represent Costa Rica’s high season for birding (and tourism) simply because much of the country is significantly drier at this time of the year. Coincidently, the birding also tends to be more productive so watching birds and the dry season make for a nice fit. In the latter part of the dry season, more birds are singing and responding to playback (oh yes, the majority of tours fire up those iPods), some migrants are passing through, and wintering birds boost the species list.

Those upsides outweigh the downsides such as blazing hot weather on the Pacific coast and groups of non-birding tourists that send shockwaves through the forest with garish clothing and loud voices. Many of these non-forest people also feel compelled to share their monkey and macaw sightings with you, and to make sure that you don’t miss out on this vital information, do so with booming voices.

“DID YOU SEE THE MONKEYS?!?

Whether I saw “the monkeys” or not, I tell them that, “Yes, I did” in the hope that they won’t proceed with telling me where they saw them. They usually do however and follow that up with information about the nesting macaws.

“WE ALSO SAW MACAWS. DID YOU SEE THOSE?” (as four of these spectacular birds flush from the canopy with intimidating screams).

Or, sometimes, it’s just one person who tells me where to see the macaws in a much quieter voice. Clad in snow-white tennis shoes, this person picks his or her way through the rainforest along with the rest of his or her repellent-doped, erstwhile companions . Many times, such a person also happens to be wearing sunglasses (which is strange because the understory of primary forest is already so dim that you might be better off wearing night vision goggles). The sunglasses seem to add to the intrigue as, unsmiling, he or she briefly stops to tell me out of the corner of the mouth, “There’s macaws by the bridge. Up in a big tree. Nest. Can’t miss em.” This purveyor of insider bird information then continues on with the rest of the group as if nothing happened. I am left enlightened, speechless, and wondering if I should leave the trail and hide along with the antthrushes, quail-doves, and other cool birds that already did so.

I would probably find my feathered friends huddling behind a log and there would be a couple of Black-faced Antthrushes, a White-whiskered Puffbird or two, Gray-chested and Ruddy Quail-Doves, and a Spectacled Antpitta. To be polite, I would ask them if they minded me joining their quietly concealed party. They would surely agree when noticing my binoculars, lack of shades, and subdued clothing and we would keep out of sight until the long line of tourists wearing spotless outfits had reached their respective habitat; the parking lot.

Don’t get me wrong, I would love to see thousands of tourists visit Carara National Park on a daily basis if that would help with conservation efforts. I know they are just trying to be helpful. I also, know, however, that finding birds in tropical forest requires constant vigilance and concentration so I do my best to avoid non-binocular wearing people. One easy way to avoid running into a bunch of non-birders when searching for antswarms and waiting for tinamous to appear at Carara National Park is by visiting in October. I did just that yesterday when guiding a client and although we ended up seeing a few non-birders here and there (and one guy who asked what we were looking at when trying to espy a Nothern Bentbill) the place was pretty quiet.

The wet season also boosted the biting bug population but not enough to chase us out of the forest. We couldn’t do the river trail because it was flooded (as it does every year during the wet season) but we still had interesting birding along the HQ trail despite a starting time of 9 am. We got lucky upon arrival with two King Vultures circling into the air on thermals above the parking lot. A dark phase Short-tailed Hawk was with them along with an accompaniment of Black Vultures. Cloudy weather kept things pretty active inside the forest and we had a pretty good number of mixed flocks for the next few hours.

Parties of Black-hooded Antshrikes, Dot-winged Antwrens, Plain Xenops, and Tawny-crowned and Lesser Greenlets moved through the tall rainforest and were joined by Sulphur-rumped Flycatcher, Eye-ringed Flatbill, and the three most common woodcreepers- Streak-headed, Cocoa, and Wedge-billed. Greenish Elaenia, Northern Bentbill, Streaked, and Yellow-olive Flycatcher increased our list of Tyrannids and White-winged Becard was also seen well.

More colorful birds were represented by a stunning male Red-capped Manakin (sorry, too dark for a photo!), Rufous-tailed Jacamar, and Bay-headed Tanager. We didn’t see any trogons in the forest but this came as no surprise because they are decidely more difficult to see at this time of the year (they vocalize less and could be molting). Parrots were also noticeably absent. Other than hearing a few macaws, our only other psittacine was Orange-chinned Parakeet. It was interesting to find a large number of this edge species feasting on figs inside the forest. Oddly enough, we didn’t see any other birds at the fig tree.

We also did poor on ground birds and the lack of flowers resulted in very few hummingbird sightings. A couple of Spectacled Antpittas were calling but none were close enough to see, and we got a glimpse of one very shy Black-faced Antthrush as it raced away from us. The only ground bird that we got decent looks at was Gray-chested Dove.

As with every visit to rainforest, however, we had an excellent, unexpected encounter. Just past the bridge over the Quebrada Bonita, the chipping call of some unknown bird caught my attention. Since I didn’t recognize the vocalization, I figured it was probably an alarm call of sorts. Although I didn’t see what was making the call, I did find the probable reason for the alarm when my binocular turned a ball of leaves into  a roosting Spectacled Owl! I also noticed its mate when that bird looked down at us with those fierce, yellow, owl eyes. 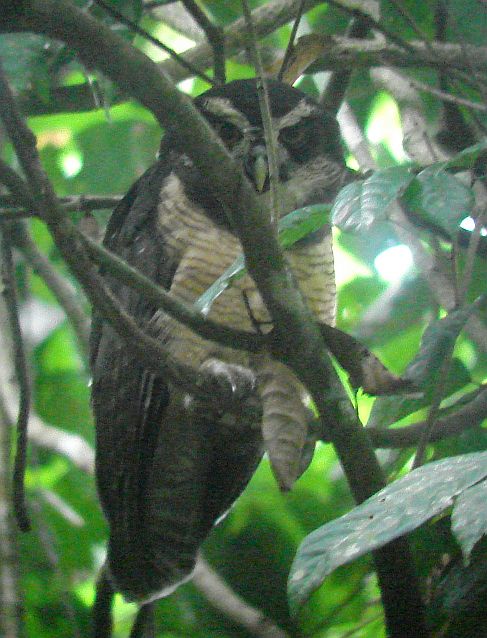 I almost never see roosting owls so this was a prize! It will be interesting to see if I can refind them on future visits to Carara.

As is typical of visits to Carara and surroundings, we kept on adding birds in wetlands and dry habitats outside of the park until calling it quits around 4:30. We got about 115 species and would have gotten more if we had started at dawn so I suppose the point of this post is to expect a bunch of birds when birding Carara National Park no matter what month it is.

I must say I was laughing so hard after reading the first paragraph or so about non-birders I could hardly breathe….
Hope next time I am in Costa Rica I can have you spend a day with me birding….
Unfortunately there doesn’t seem to be a trip in the immediate future..
Gallus

@Gallus- Glad to make you laugh. Hopefully see you sometime down this way.

Just wanted to say I really enjoy your blog and your stories of birding in Costa Rica. I found this website while planning a birding trip to Costa rica. I also wanted to ask a question about birding Carara. Someone mentioned to me the river trail is now closed. You said that it is closed in the wet season. Do you know if it is closed year round? I am planning on visiting in mid December and am wondering if it will be open.

@Jacob- Glad you are enjoying the blog. The river trail should be open by then. It floods every year during the rainy season but is usually dry enough by December to walk it. Will still have some muddy spots but you won’t have to wade through 3 feet of water.