Costa Rica is definitely a hot, tropical country. At 9 degrees latitude, the sun’s rays can burn with the intensity of some vicious alien device. In the humid lowlands, you sweat but just can’t seem to cool off. 80 degrees is the norm, it feels like summer most of the time, and thank goodness for that! However, the uplifted nature of Tico topography also makes a fair portion of the country as cool as an October night. Go high enough in the mountains and that electric October feeling can also morph into a chilly November. I know this from personal experience because I have wandered around the high, temperate zone oak forests on breezy, misty nights in search of Unspotted Saw-Whet Owl, Bare-shanked Screech-Owl,  and Dusky Nightjars.

The latter two birds are regular while the first is pretty darn rare. I still need the saw-whet sans spots but plan on getting it this year. Part of that plan will include several layers of warm clothing, the outer shell of which will be impervious to water. I know this is what is needed to wander around high mountain forest while tooting like a tiny owl because I tried it on Saturday night at Paraiso de Quetzales (in retrospect, I think you also need to be willing to temporarily trade in some of your sanity). Although I didn’t connect with the owl, I know they are up there because others have seen them in the past.  Perhaps we would have gotten it too if we had checked more sites for a longer period of time. Although we could have spent most of the night wandering around the cold, dark forest, we didn’t want to lose a morning of birding so our small group of owl searchers opted for blanket-covered beds and traded a chance at the owl for much needed sleep. 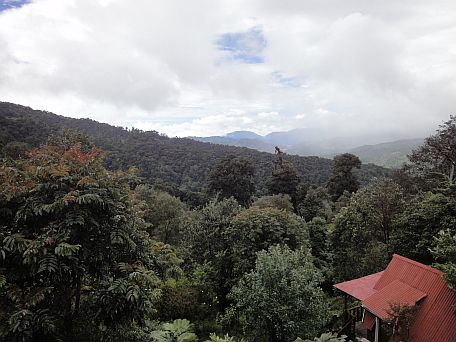 There is some really nice high elevation rain forest at Paraiso de Quetzales.

The next morning, I I forced myself to get up at 5 and listen for birds. They weren’t exactly flying around at that unforgiving hour but were definitely making their presence known with song. On my brief, pre-breakfast stroll down the Zeledonia Trail, I heard a flock of Barred Parakeets,  several Large-footed Finches, Zeledonias, the wing rattle of a Black Guan, Black-thighed Grosbeak calling a lot like its northern Rose-breasted relative, and Collared Redstarts singing their cheerful, hurried songs. The most welcome sound of the morning, though, was the calling of Resplendent Quetzals. At least two of these spectacular birds were singing. Here is what some of the morning medley sounded like: Zeledoniaandquetzal

After some of the best coffee in the world (seriously) and a tasty breakfast, our birding club group were led by the Jorge, owner’s son, in our search for quetzals. This involved walking up to an area with a large number of wild avocados in fruit and waiting for the birds to show.  After about ten minutes, someone in our group spotted a female flying through the canopy and we quickly got onto the bird. 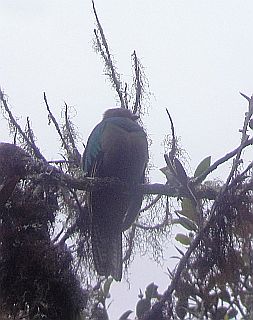 Jorge explained that the male was also probably nearby since the birds had probably finished feeding for the morning and were just sitting around, digesting the avocado fruits they had eaten for breakfast. While watching the female and waiting for the male to fly into view, someone in our group spotted the male sitting in the same tree as the female. It was perched up there in the canopy the entire time but despite its brilliant plumage, was obscured enough by a clump of leaves to keep us from noticing him! After some strategic repositioning of the scopes, we got the male into view and everyone enjoyed prolonged, soul satisfying looks at this amazing, iridescent creature. 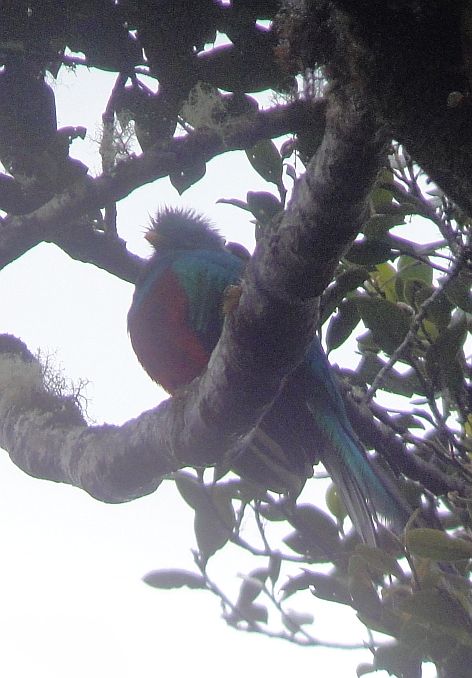 A bad picture of the fancier male. 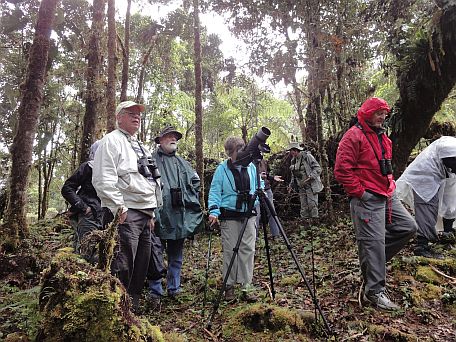 
As nice as quetzals are, they aren’t the only birds you see at “Quetzal Paradise”. Black-capped Flycatchers were hawking insects from fencepost perches, Large-footed Finches scratched in the leaf litter, Yellow-thighed Finches foraged in the bushes, and mixed flocks of Ruddy Treerunners, Black-cheeked Warblers, Collared Redstarts, Sooty-capped Bush-Tanagers, and other highland endemics rushed through the vegetation. Our group also had great looks at Buffy Tuftedcheek that came in to playback and some people also had glimpses of Silver-fronted Tapaculos that skulked in the dense undergrowth. The best sighting was arguably that of a Peg-billed Finch spotted by two fortunate individuals as this uncommon finch has been a tough bird to find in recent years.

Of course the hummingbird action at the feeders was pretty darn good too! The lighting was perfect for admiring the jewel-like plumage of multiple Fiery-throated Hummingbirds, Magnificent Hummingbirds vied with the Fiery-throateds for attention, and an occasional Green Violetear zoomed in to the feeders before being chased away. Volcano Hummingbirds were also common at Paraiso de Quetzales but they didn’t dare come to the feeders. I was surprised to not see White-throated Mountain-Gem in the forest as an orange-flowered sage species was blooming throughout the understory. 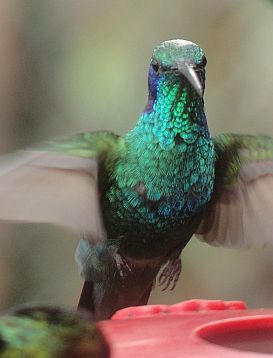 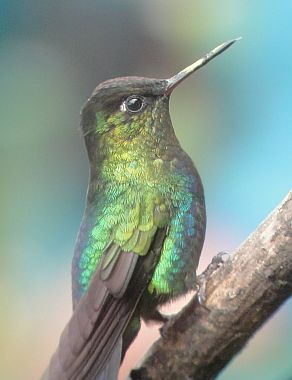 Fiery-throated Hummingbirds look OK from the side, 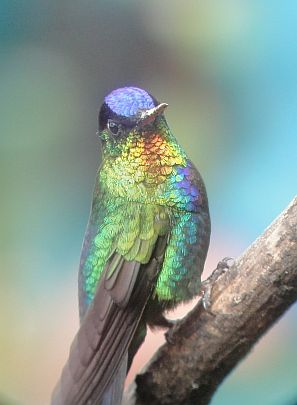 but turn into living jewels from the front. 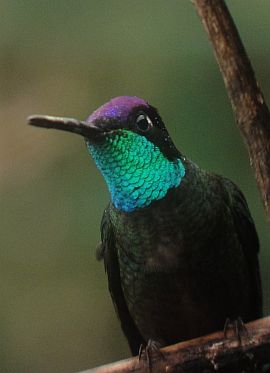 Another big miss was Ochraceous Pewee as the area is usually reliable for this uncommon bird. Oh well, that’s yet another reason to head back to Paraiso de Quezales for exciting highland forest birding in Costa Rica.

2 replies on “Birding in Costa Rica at Paraiso de Quetzales”

Very nice read, Patrick. I haven’t seen a Resplendent Quetzal yet, maybe this year. Last year the Quetzal Trail here in Panama was closed due to mud when I went. The Hummingbirds are gorgeous! Good luck on the Saw-Whet sans spots in the future.
Sue

@Sue- That trail must have been pretty bad for them to close it. Hopefully you will see a few this year. Thanks, I plan on getting that little known owl this year.