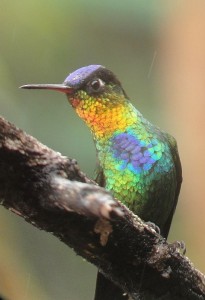 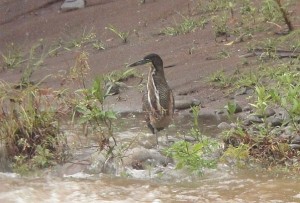 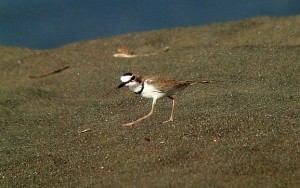 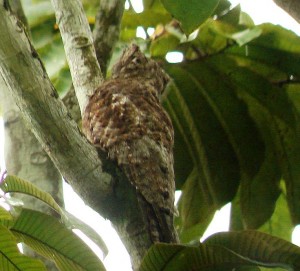 According to the calendar followed by myself and many folks in the world, the end of yet another year is nigh. Those December days can be exciting ones for a birder. Christmas counts abound, the tension to squeeze a few more species out of the remaining days of 2012 becomes paramount for people doing a Big Year, and we can look back and revel in the personal birding high points that took place since January first. 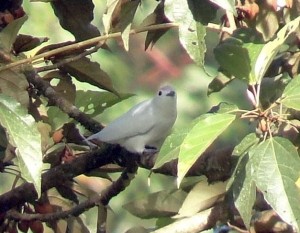 Snowy Cotinga was one of the first great birds I saw in 2012.

For me, those high points included a bamboo seeding event on Poas and Barva volcanoes that attracted a host of species that specialize on the seeds of said grass. Peg-billed Finches were finally common. Rare, juncoish Slaty Finches made an appearance, and Barred Parakeets were often glimpsed as they zipped overhead. I missed the ground-dove with the burgundy-stained chest but I bet there were hidden away in some inaccessible, bamboo choked ravine. 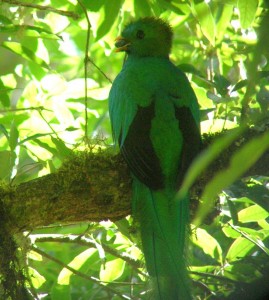 Quetzals are the greenest of greens.

Poas in 2012 was also good for the ever spectacular Resplendent Quetzal and I saw many a Black Guan but one of the most amazing, dream-like birding experiences I have ever bore witness to happened much further downslope in the town of Santa Barbara de Heredia in late June. I awoke to a bird making an odd chattering sound near my backyard just after dawn and since it was a parrot that I didn’t recognize, you could say that I was rather intrigued. As I rushed to get my binos, a neighbor’s pet seemed to be the most logical explanation because the other possibility just seemed…well…unbelievable.

Much to my pleasant surprise, I saw that the mystery psittacine was not behind bars but was perched on a cable and its shape fit that second very unlikely hypothesis! Amazingly, yes, it looked like it was probably a Red-fronted Parrotlet but the look was 100% silhouette so I ran for my scope. After racing to get the scope out of a Pelican case and praying that the bird was still there, I rushed into my bedroom, wedged the tripod-less scope against the window and zoomed in on the bird. Sure enough, there was the red crown, short tail, light colored bill, and red on the face that assured me that yes, this was most certainly the toughest parrot species to see in Costa Rica! 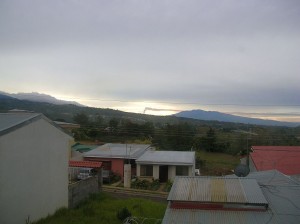 Where I saw the parrotlet- a bird that wanders across a range of elevations, but usually in much more forested habitats.

Certainly one of the best sightings I have ever had given the rarity of the species, the fact that it was a definite lifer, and the unusual circumstances, but it got beat out for bird of the year by another even more mystical species. That was none other that the almost legendary Unspotted Saw-whet Owl. Like its Northern cousin, it’s about as close as one can get to having a live, flesh and blood, toy stuffed animal. Unlike the other saw-whet, though, you can’t expect to see it just about ever. I mean you can brave its cold, high elevation habitats in the dark of the night and try for it again and again and again, but you would still be lucky to see it. I don’t make that statement lightly either but base it on the fact that very few people have laid eyes on this cutest of owls in Costa Rica, and I have tried for it on several occasions.

Ernesto Carman also tried for it on many an occasion and it took him about five years to finally find the bird. That fifth year was 2012 and this excellent birding guide was gracious enough to show myself and a few other friends one of the birds during the month of October. We got it in park-like habitats at about 2,300 meters on Volcan Turrialba on a clear, star-filled night. We heard it give its pygmy-owl like calls, saw it flutter out to snatch an unlucky arthropod, and watched it for about 15 minutes as it sat in the high branches of a tree in a cold, wet pasture. Basically, the experience was as soul satisfying as we could imagine.

This was my best bird of the year and although I couldn’t commemorate the event with photos, I cherish memories of that special night made vivid by the importance of both the bird and the people who shared the occasion: Robert Dean, Susan Blank, Johan Kuilder, Ineke van Leeuwen, and Ernesto and his wife. 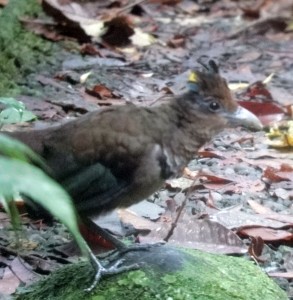 The owl even beat out my long anticipated and awaited meeting with a Rufous-vented Ground-Cuckoo.

What will 2013 bring for birding in Costa Rica? The only way to find out is to get out and do a bunch of birding. Luckily, I plan on doing just that. 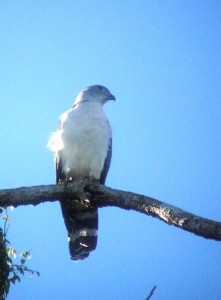 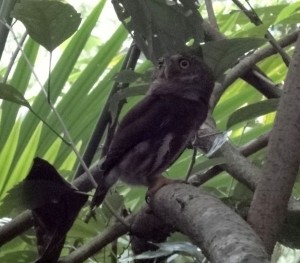 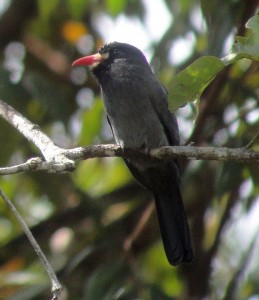 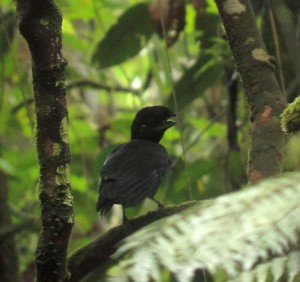 
For the best in lowland Caribbean slope birding in Costa Rica, bird Veragua and other sites in the southeastern part of the country. There is a good amount of forest and who knows what you might see at those underbirded sites. To bird at Veragua, you may need to take a tour. If interested in visiting for birding, contact them and ask for Daniel Torres.

It’s birding season in Costa Rica! Ok, well it almost is and since you are going to see lots of birds any time of the year in this biodiverse place, an actual birding season is kind of debatable. But, hey, this is a blog and I since I am the sole editor, I can be as creative as I want. Nevertheless, there is some truth to the birding season thing.

You see, the majority of birders and organized tours come to Costa Rica from January to April. They think this is the best time to visit for birding because it’s drier, that’s when most people go, and more birds might be singing. In other words, vacations are sort of planned on hearsay. Well, hearsay is alright as long as it’s accurate and in the case of birding in Costa Rica, I would assess the accuracy of the dry season being the best time to visit at around 70%.

While it does tend to rain less during the first four months of the year, the lower degree of precipitation does not generally include the Caribbean slope. In fact, if I head over to the other side of the volcanic ranges visible from my window between January and March, I could easily be birding in fierce downpours for hours on end while everything gets the moisture sucked out of it by sun and wind back over on the Pacific slope. For this reason, I prefer to do my Caribbean slope birding in September and October because while those represent two of the wetter months on the Pacific, they are usually the driest on the Caribbean. 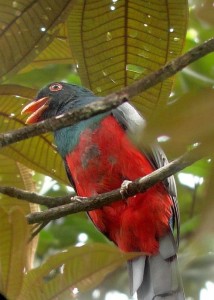 I took this picture of a Slaty-tailed Trogon during a nice, less wet September on the Caribbean slope.

Speaking of rain, dry doesn’t necessarily mean good when it comes to birding. I get tired of the rain but as just about anyone whom I have guided knows, I long for a nice, cloudy day. Those cloudy days with intermittent rain are the best times to go birding in any habitat in the country because the most beautiful of sunny days are also the most birdless. Who knows why this is the case but it definitely is. Therefore, when birding this upcoming dry season, make sure you get up before dawn and focus on all things avian until about 8:30 AM when the hot sun shoots down with ultraviolet fury to put a damper on activity.

Some other tips with those small black circles we call “bullets” for quick reference: 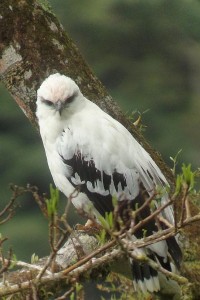 You might see a gorgeous White Hawk or two. 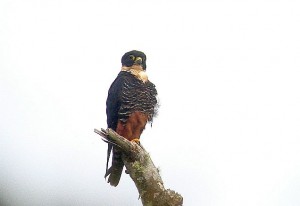 And a dramatic Bat Falcon. 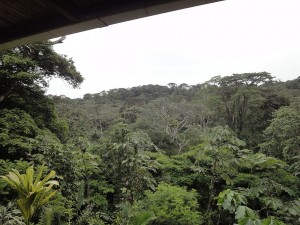 View of the canopy- would love to do an all day count there! 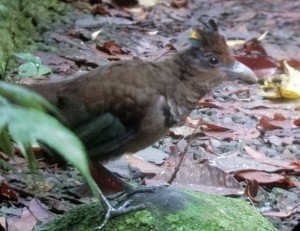 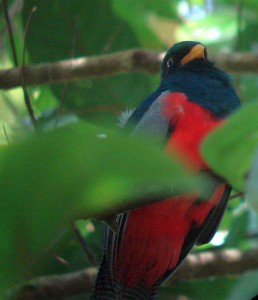 Lovely Cotinga, or Lattice-tailed Trogon like some of my luckier clients did this year 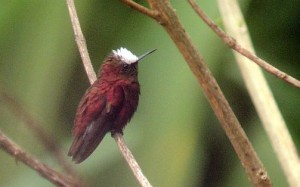 although Snowcap is a lot more likely.

Hope to see you out in the field this upcoming birding season in Costa Rica!