Dominical is this tiny beach village in southwestern Costa Rica that appears to be mostly populated by surfers, people with stylistic tattoos of the moon, and fishermen. Although Hacienda Baru welcomes a fair number of birders, Dominical rarely features in birding tours to Costa Rica. Local birding tours might do more birding in the area but in general, most birders visiting Costa Rica just drive on past Dominical.

It’s hard to pick sites to focus on when planning a two week birding trip to Costa Rica but don’t feel as if you have to leave Dominical out of the picture. The entire area has more much more birding potential than people realize and after having spent a weekend of guiding down that way, I really wish that I could have had more time to explore the general area. The hills above and near Dominical are mostly forested (and accessible by more than one public road), scrubby fields host interesting species, Hacienda Baru, Rancho Merced, and other nearby sites have trails that access fair habitat, there are beautiful beaches in with offshore rocks that host seabirds, and mangroves near Dominical have Mangrove Hummingbird.

That adds up to a lot of possible birds and our local birding club ended up identifying 150 or so of them in just 2 and a half days of rather casual birding. We stayed at the Villas Rio Mar and this hotel turned out to be a fantastic choice for lodging. There are a few different types of comfortable rooms (most of which have air conditioning), a truly excellent restaurant, great service, a tour desk, and gardens that host a fair variety of bird species including Fiery-billed Aracari, Blue Dacnis, and Thick-billed Euphonia. 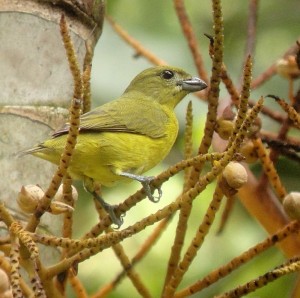 The gardens can be good for bird photography. Thick-billed Euphonias such as this female, Bananaquits, Tennessee Warblers, Gray-capped Flycatchers, and other species were visiting the palms for flowers, fruit, and bugs.

On our first afternoon, we birded the road in front of the hotel. It parallels the river and goes past fields, riparian growth, and may eventually access better forest habitat. It also offers an excellent view of a nearby forested ridge where scoping may turn up a Turquoise Cotinga and raptors. Although we didn’t connect with the cotinga, we picked up King Vulture, Swallow-tailed Kite, Double-toothed Kite, Broad-winged Hawk, Short-tailed Hawk, and Gray-lined Hawk in that area. We studied Gray-breasted Martins, Southern Rough-winged Swallows, and Blue and white Swallows that were perched on the wires, and saw a fair variety of common edge species.

That evening, a pair of Spectacled Owls and a juvenile called from forest next to the hotel. Although they didn’t show up after dinner, we did manage to see one of the Barn Owls that is presently nesting under the bridge just before the police checkpoint.

On Saturday, our group visited Rancho la Merced for a couple hours of birding on their trails. The birding was fairly slow and the trail my group took went through old second growth but I think they also have at least one trail that accesses primary forest. Best birds were White-necked Puffbird, Double-toothed and Gray-headed Kites, Rufous Piha, Blue-crowned Manakin, and Ruddy-tailed Flycatcher. We also had other common species like Riverside Wren and Black-hooded Antshrike but overall, the birding was much slower compared to the high quality forests at Carara. Nevertheless, I suspect that their trails and the road through the reserve have a fair amount of potential. 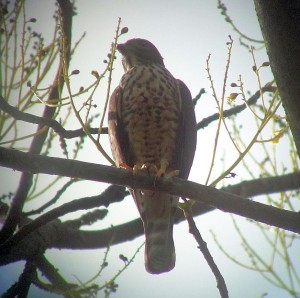 After a wonderful buffet breakfast at the hotel, some of the group opted for cooling off in their huge swimming pool or visiting the village while the rest of us went birding at the mouth of the river. While watching from a shady spot, we saw a small sampling of common shorebirds, herons, and egrets, White Ibis, both Amazon and Green Kingfishers, Plain Wren, and a few other species. Best bird was a Pearl Kite! 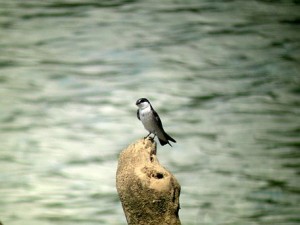 We also had that miniature, tropical Tree Swallowish species known as the Mangrove Swallow.

That afternoon, some birded the road again while the rest of us checked out the short trail at the hotel. It doesn’t access very good habitat but the riparian growth and second growth can turn up a fair number of species and the stream hosts small birds that come to bathe in it in the late afternoon. We heard Great Antshrike and Little Tinamou, and saw Eye-ringed Flatbill and one of the best birds of the trip- Black-tailed Flycatcher! This flycatcher is pretty rare in Costa Rica and the one we saw was a long-awaited lifer for yours truly (yee haw!)! It’s remarkably similar to Sulphur-rumped Flycatcher but has paler, olive upperparts and paler underparts. Although the bird we saw did have a bit of color on the breast, it was much more subdued than the contrasting colors of the Sulphur-rumped. 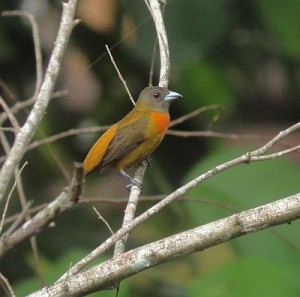 Female Cherrie’s Tanagers have beautiful plumage- they showed their stuff while bathing in the stream. 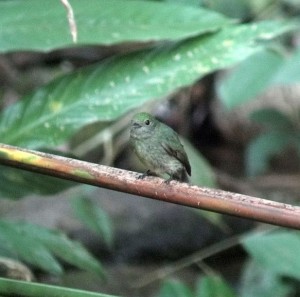 Female Blue-crowned Manakins also visited the stream along with Riverside Wren, and a few migrant warblers.

The next morning saw us making a trip to the Guapil road and mangroves. This is the next road on the left after Hacienda Baru. I believe it’s signed and I’m glad that we checked it out. The scrubby fields at the beginning of the road had a small flock of Yellow-breasted Seedeaters, at least one Ruddy-breasted Seedeater, Smooth-billed Ani, Red-crowned Woodpecker, and other open country species. Although we didn’t get niceties like Yellow-crowned Tyrannulet, Scrub Greenlet, or Red-rumped Woodpecker, I wouldn’t be surprised if they were in that area.

Further on, the road goes next to a small creek and eventually goes along the beach. It ends at the mouth of a river and a nice area of mangrove forest. Upon arrival, we checked the estuary first and got nice looks at several common shorebirds, egrets, Pale-vented Pigeons, and Bare-throated Tiger Heron. 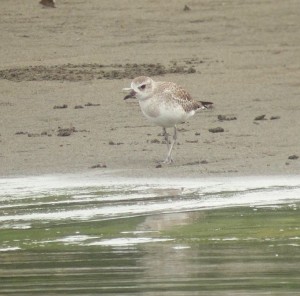 Black-bellied Plover minus the black belly.

When we went to check the mangroves, a short fruiting fig was busy with common bird species, Blue Dacnis, and Thick-billed Euphonia. While watching that tree, Panama Flycatcher also made an appearance and two Mangrove Hummingbirds suddenly showed up and let us watch them for several minutes! They may use dead twigs there for a regular perch because we didn’t see them feeding on any flowers. This elusive, endangered endemic was arguably the bird of the trip. Unfortunately, it didn’t stay long enough for me to get a photo…

On the way back to the hotel, we picked up our 16th diurnal raptor species for the trip in the form of a Laughing Falcon and watched a distant shrimp trawler covered in Brown Pelicans, Brown Boobies, and Mag. Frigatebirds. I probably won’t get the chance to bird Dominical again any time soon but the next time I do, I plan on exploring the forest along roads that go up into the foothills! 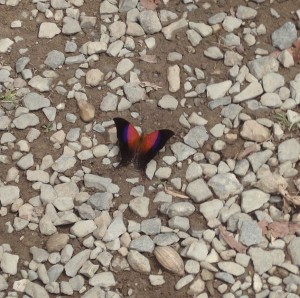 This gorgeous butterfly was right at the entrance to the hotel. Please let me know what this is if you happen to know!

3 replies on “A Weekend of Birding Costa Rica at Dominical”

According to this site, the butterfly is a Iole’s Daggerwing Butterfly:
(http://pdpete.tumblr.com/post/32505462873/ioles-daggerwing-butterfly-marpesia-iole)
Liz and I saw a Marpesia butterfly species near Alberque del Socorro and it has a similar color pattern.

We also saw the Black-tailed Flycatcher at Bosque del Rio Tigre, pointed out by Abraham. Getting a Costa Rican bird species before you has to be a first for me. You can’t have many left!

@Steve- Thanks for that. That butterfly was truly stunning.