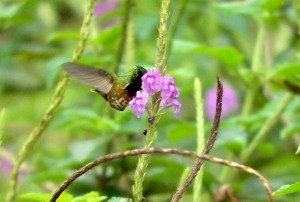 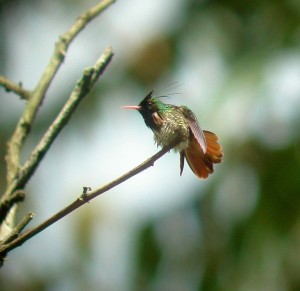 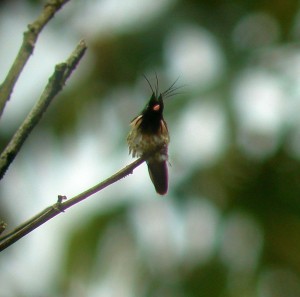 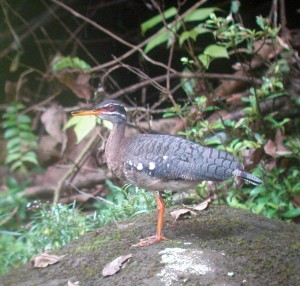 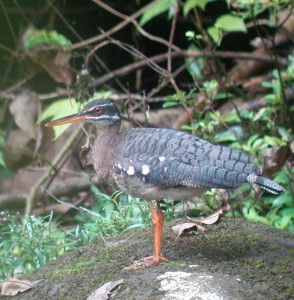 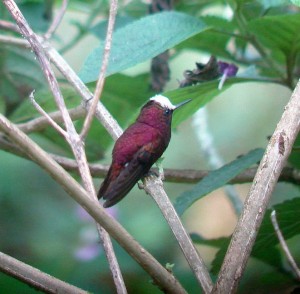 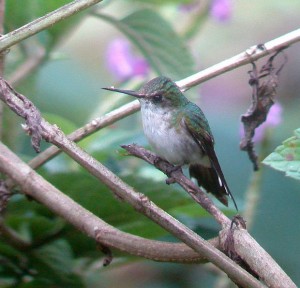 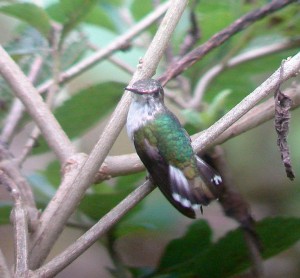 Cano Negro is a small village, a place to fish for monster Tarpon (yes, they are monsters), and an access point for one of the two major wetland sites in Costa Rica (the other one being Palo Verde). Since it’s a five hour drive from the Central Valley, I don’t make it up that way very often. Well, to be honest, I haven’t gone there since 2001 so, I was pretty excited to make a much needed trip to Cano Negro with the local birding club this past weekend.

To sum things up, I got 27 year birds, I think 6 new birds for my Costa Rica list, and three damn delightful lifers! One of those was more or less expected, and the other two were straw-colored marsh birds that I hoped to see but knew that I could easily be going back to the Central Valley without them.

So, here’s some highlights and general impressions from the trip:

Cano Negro is easy to get to: It’s a fairly quick, five hour drive where you may be entertained by drive-by sightings of toucans, parrots, parakeets, and other cool tropical birds. Bird along the way on the right route and you could even tick things like Fasciated Tiger Heron, Sunbittern, Torrent Tyrannulet, and so on. The road in to Cano Negro is rocky but can still be done with a two wheel drive car at least during the dry season.

The Loveats Cafe is en route: If you are coming from the Central Valley, screw that route through Zarcero. Take the San Ramon-San Lorenzo route and onward to Muelle. This passes by excellent birding opps such as the Hummingbird Garden, the San Luis canopy, the road to Manuel Brenes Reserve, and most of all, the Loveats Cafe! Stop there for excellent vegetarian food, including authentic Middle Eastern hummus, good coffee, and baked goods. 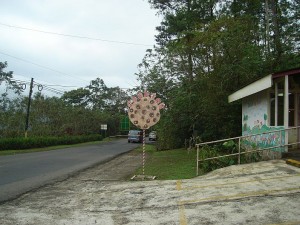 The birding and photography is good right in the village: The village is pretty rural so there are lots of fruiting trees and gardens that are filled with birds like Red-lored Parrot, Collared Aracari, and chances to 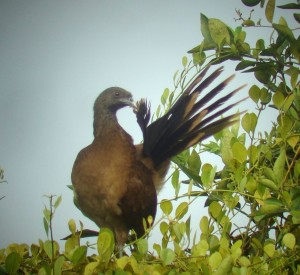 witness sad attempts by Gray-headed Chachalacas to be Peafowl, 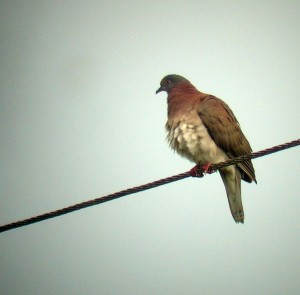 check out many a Pale-vented Pigeon lounging on power lines, 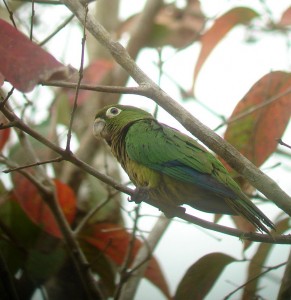 get into staring contests with Olive-throated Parakeets, and

marvel over the blues of a male Red-legged Honeycreeper.


Some hotels have feeders: At least ours did (the Hotel de Campo) but I think others in the area might do the same or be convinced to put out a banana or two. Although no Yellow-winged Tanagers showed up, it was still nice to watch the usual parade of common bird species like 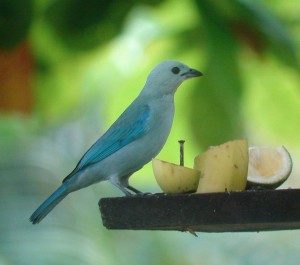 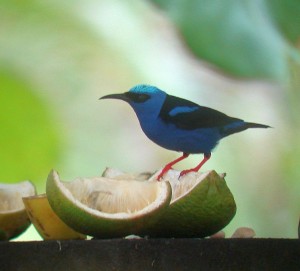 Red-legged Honeycreeper. You gotta love it when you can soak up the views of a blue and turquoise bird with hints of  purple, classy patches of black, and red legs. 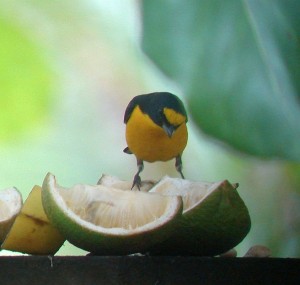 Yellow-throated Euphonia. It’s really cool when birds perch on the fruit they eat. Euphonias are basically goldfinches that evolved into colorful mistletoe eaters. This male shows the classic euphonia blend of steely blackish-blue and bright yellow. 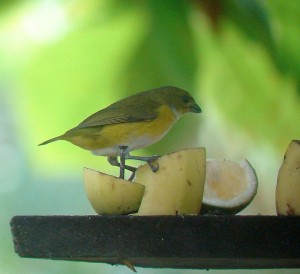 This female Yellow-throated Euphonia shows the much drabber olives and dull colors that make them a pain to identify.

Oh and there is great wetland birding too: Wetlands on the road in can host any number of waterbirds but the best waterbirding is near the village of Cano Negro. A lagoon behind our hotel had the usual assortment of common waterbirds along with occasional Green Ibis, flyby Merlin, and the owner said a Jabiru was there a few days before. 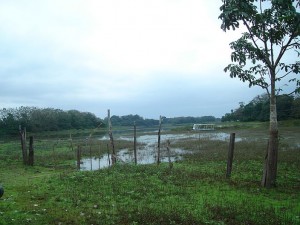 The lagoon behind the Hotel de Campo.

A boat trip is the best way to experience marsh and river birding though and our Saturday morning boat trip was basically a big fat success! 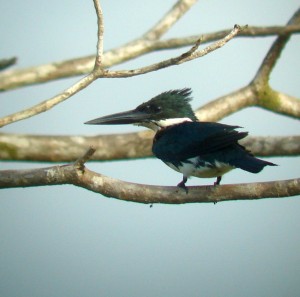 Amazon Kingfishers were constant companions and the trip to marshy lagoons was highlighted by American Pygmy Kingfisher, Green Ibis, a bevy of Mangrove Cuckoos (yes there were at least 6), and two surreal Sungrebes! The lagoons had the best stuff though. 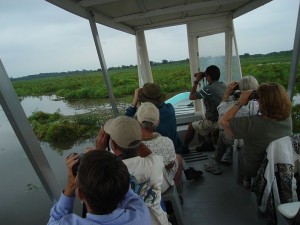 These people were looking at… 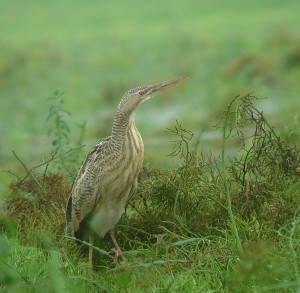 Pinnated Bittern! Finally, after years of wondering how similar this neotropical bittern was to immature tiger-herons, I can personally say that it looks quite different. Sure it has some of that barring but it’s much paler and has those bittern streaks in front among other differences. It’s almost like a massive, mutant Least Bittern that hybridized with a tiger-heron. The very bird pictured here was lifer number one of the trip. 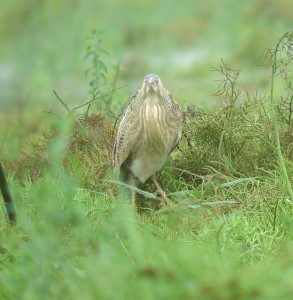 When seen head on, this neotropical marsh monster does sort of look Frankensteinish.

Yellow-breasted Crake!– No picture but lifer number two and a top shelf one at that. As luck would have it, as soon as we saw the Pinnated Bittern, a small straw-colored bird popped up out of the vegetation in front of me and transformed into a Yellow-breasted Crake. Other people in the group saw one or two more while watching the bittern. 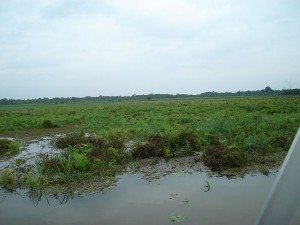 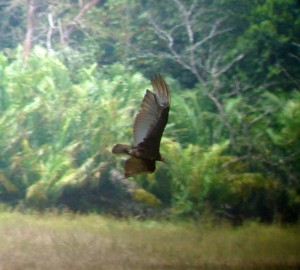 We also saw a few Lesser yellow-headed Vultures at this site. I digiscoped this harrier-like vulture through my binoculars.

An ocean of raptors: After leaving the place on Sunday, sunny weather turned the skies into a ridiculous raptor migration bonanza. It was the biggest I have ever seen in Costa Rica and there were kettles and lines of vultures, Swainson’s Hawks, and Broad-winged Hawks pretty  much in every direction. It was simply downright silly crazy. 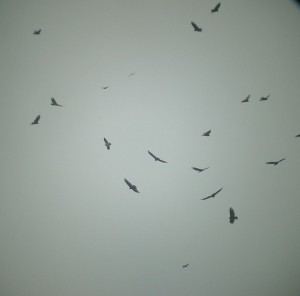 A bad representation of the thousands of raptors that were migrating over our heads.

A visit to El Roble wetlands: Although local ornithologists seem to refer to this place as the Humedal Medio Queso (literally half cheese wetlands), locals call it El Roble. They go there to fish on weekends. We went there to see birds for an hour and it was pretty darn awesome. We saw more Lesser Yellow-headed Vultures, a distant Northern Harrier (good bird in Costa Rica), and two more Pinnated Bitterns! To get there, take the road at the Los Chiles airport that heads to the east. If I recall correctly, this gravel road is on the south side of the airport. Once you get to the wetlands, don’t drive into the Medio Queso river! The road simply ends and starts up again on the other side of the river because they have yet to put in a bridge. 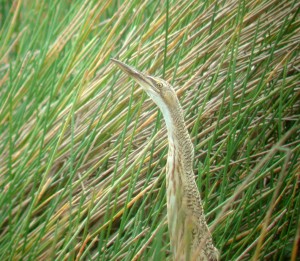 What a trip! The third lifer was Nicaraguan Grackle– not as common and easy as you might expect but we saw a few here and there, especially on the boat trip.

Not much more to say than to expect lots of cool birds when you go to Cano Negro! I feel that I should also mention that mosquitoes weren’t bad at all during our trip although the area was much drier than normal.