A few days ago, birding friend Susan and I did some morning birding on the road to Manuel Brenes Reserve in the foothills of the Tilaran Mountains. I have yet to make it all the way to the reserve (which is a private reserve for the University of Costa Rica in any case) but the main reason I have never ventured that far is because you can stick to the first 3 or 4 kilometers of the road and have yourself some might fine and fantastic birding. As with any tropical forest site, the birds you come across can vary from one day to the next but spend a few mornings on that road and you are bound to see something good. Crested Eagle has been seen there in the past and such uncommon species as Sharpbill, Tiny Hawk, Purplish-backed Quail Dove, Yellow-eared Toucanet, Rufous-browed Tyrannulet, and Blue and gold Tanager are regular.

The road goes through good foothill forest and although the absence of trails into the forest is a disadvantage, you can still see into the understory in many areas. The road is best done with four wheel drive, or (even better) on foot. The road eventually leads to cultivations of ornamental plants and there aren’t any buildings, stores, or other facilities but that’s why the birding is so good. On Sunday, we had a cloudy, misty, rainy morning in that order but still wonderful birding with the following highlights:

So, we departed the road in pouring rain around 11 and headed down the highway to find a gas station. In a show of the microclimates common in montane areas, it was bright, dry, and sunny down that way! We then headed back up to the LoveEats cafe for a delicious lunch and watched for soaring raptors and other species visible from the cafe. 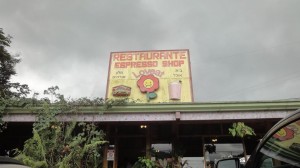 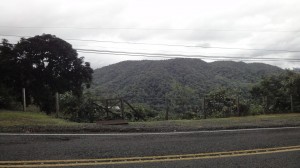 No Solitary Eagle or other rarity but we did pick up Gray Hawk, Short-tailed Hawk, and saw pretty birds like Green Honeycreeper, Crimson-collared Tanager, and others near the cafe.

After driving back up hill, we once again found the rain and headed on back to the Central Valley.

A link to the eBird checklist from that memorable morning : http://ebird.org/ebird/view/checklist?subID=S14975216

2 replies on “Some Highlights from Good, Rainy Birding on the Manuel Brenes Reserve Road”

Awesome! Thanks for the information and the pictures!

[…] and La Fortuna. The low level of traffic and fantastic birding at places like Lands in Love, the Manuel Brenes Road, Finca Luna Nueva, the Cocora Hummingbird Garden, and the San Luis Canopy make this area one of my […]