We all love woodpeckers. Even non-birders get a kick out of the seemingly crazy antics of a bird that bangs its head against trees and other objects as fast as it possibly can. They are the original classic head-bangers and just like rock stars, many of them sport “wacky hairdos”.

Maniacal, laughing vocalizations and forgetting to flap the wings until they about to fall out of the sky also seem to point to birds living way out there on the edge. Yes, wacky, wonderful, and always much appreciated. Although southeast Asia comes out on top in terms of woodpecker diversity, Costa Rica also has its fair share of avian head-bangers. We have 16 of those funtastic species and most are regular in the right habitat (with the exception of the Red-rumped Woodpecker- much easier in South America). Instead, we have the standard Central American Veniliornis, the good old Smoky-brown and this dull woodpecker is a common resident of second growth and rainforest edge in the lowlands and foothills of the Caribbean slope. It’s shaped a bit like a Downy and seems to likewise be adapted to pecking on vines and thin branches.

Speaking of the Caribbean slope, the northern lowlands seem to be the best region in Costa Rica for seeing a bunch of woodpeckers. I see more species of woodpeckers in the Sarapiqui region, Laguna del Lagarto, and other sites in northern Costa Rica than other parts of the country. I was reminded of that high woodpecker diversity a few months ago on a trip to the El Zota Research Station when on our way to the station, we found a mixed flock sort of dominated by woodpeckers. While teasing bird identifications out of the rustling leaves, vines, and big old tropical vegetation of a forested riparian zone, we had a few Black-cheeked Woodpeckers (the standard Caribbean slope Melanerpes),

a couple of Rufous-wingeds (a common canopy loving bird of the Caribbean lowlands),

had at least one Chestnut-colored (regular in edge and canopy of lowland rainforest),

its other cool tropical rufousy woodpecker relative, the Cinnamon (which posed incredibly for us as it foraged in bromeliads), 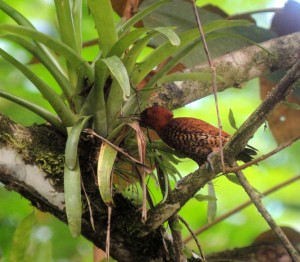 a Lineated Woodpecker (the neotropical Pileated),

and our “ivorybill”, the wonderful Pale-billed.

I can’t recall if we had a Smoky-brown in that flock too but we may have and also had wintering Yellow-bellied Sapsucker near there for a fine few day woodpecker total of 8 species. Other good sites for woodpeckers are Carara National Park, Bosque del Rio Tigre Lodge, and other forested sites on the Osa Peninsula but they seem to be most common and speciose in the remnant forests of northeastern Costa Rica.

Don’t forget to also watch for the near endemic Hoffmann’s Woodpecker in and around San Jose!

See and listen to these woodpeckers and more than 570 other species featured on the next version of a Costa Rica Birds Field Guide app. I helped develop.