I have written about Carara National Park on more than one occasion. One of the better birding sites in an already very birdy country, this important protected area merits more coverage because it always delivers. Although I have mentioned tips for better birding at this site in other posts, it doesn’t hurt to provide updates and more suggestions for making the most out of Carara. Try these tips to see more in and around Carara National Park:

Do both trails: There are two main trails at Carara. The “Laguna Meandrica” is the famous “River Trail” and leaves from a small, hidden parking area nearly a kilometer from the HQ heading towards San Jose. Carefully watch for the entrance to this trail on the right. The other trail leaves from the HQ and has a few loops. Both can overlap quite a bit in terms of species but also have their differences. In general, expect more edge and second growth species on the Laguna trail and more deep forest birds on the HQ trails although both are always good. On the Laguna trail, the oxbow lake is much smaller than it used to be and not nearly as productive. Given the high temperatures on Laguna, if you want to do both in a day, do that one in the morning and the forest trail after lunch. 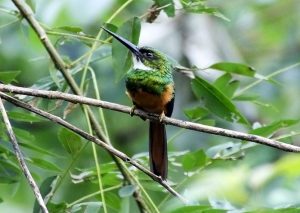 Rufous-tailed Jacamar can be seen on both trails.

Check the large rocks: On the HQ trail, pay close attention to any large rocks on the forest floor. One or more might be a Great Tinamou!

Do the back loop of the Quebrada Bonita trail: It seems like more of the deep forest species are more regular on the back loop of this trail. These are birds like Baird’s Trogon, Marbled Wood-Quail (pretty rare), mixed flocks with Russet Antshrike, Rufous-winged Woodpecker and other species, Northern Schiffornis, Streak-chested Antpitta, Rufous Piha, Golden-naped Woodpecker, and Black-striped, Long-tailed, and Tawny-winged Woodcreepers. These can also turn up on other trails but seem most common on the back loop. This is the part of the trail on the other side of the bridge over the creek. 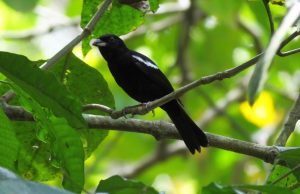 The White-shouldered Tanager is commonly seen on both trails as well.

Bird the Bijagual Road: This is an easy area to bird when looking for raptors and when you have an hour or two before the park opens (seven until April, eight at most times of the year). Great birding on the Cerro Lodge road can also make good use of that time but the Bijagual Road is also worth it. The other day, we did especially good in front of the Pura Vida gardens with looks at Fiery-billed Aracari, Yellow-crowned Tyrannulet, Western Tanager, and several other species. There is overlap with the national park but since some species are more regular on this road, it’s a good area to include in your birding mix. 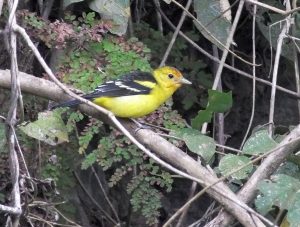 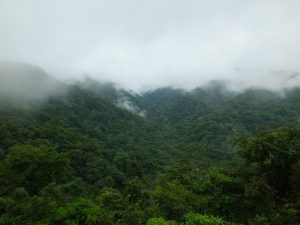 The view from the Bijagual Road during the wet season.

Check the crocodile bridge: As with just about all birding, this area is best at dawn and late afternoon, especially for flybys of various species coming to and from roosting sites. But, if you have to check it in the middle of the day, that could still be worth it because you never know when a quick walk to the middle of the bridge might turn up a Pearl Kite, Harriss’s Hawk, waterbirds, Yellow-billed Cotinga, or other additions.

Although drier conditions mean that there aren’t as many birds as there used to be, you can still see a lot, especially with a lot of time and patience. As with any tropical forest, it pays to be patient and walking with an experienced guide is the best way to see more birds.