I wish I could say that birding is always free. It would be if we still lived in a world with abundant habitat and biodiversity because there would be easier access to more birds. But, the modern realities of overpopulation and big money interests that view conservation as a hindrance to short term gain continue to result in fewer birds and even fewer places to see them. This varies by region and nation, but is why we have to pay entrance fees and guides to see birds like Philippine Eagle, wood-quails, and countless other species. Sure, we could try and see them on our own, but with more birds restricted to national parks and protected areas, paying to have better chances at more species has become a common necessity.

In Costa Rica, although there are public places that lack gates and require no entrance fee, the best and most accessible places for birding are in private and public reserves. I was at one such site last weekend and given the number of uncommon species we encountered, level of avian activity, and trail mileage, it was an excellent bargain. This place is “La Marta Refuge” and if you feel like seeing lots of birds for a bargain, I recommend it, absolutely. What to expect:

Tawny-crested Tanagers: Yes, they can be seen elsewhere but the high numbers at La Marta put them first in terms of expectations. This is probably the most common species at the site. 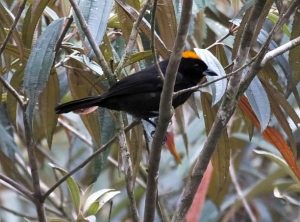 Always a fun bird to watch.

Other tanagers: Fruiting trees are also visited by Emerald, Speckled, Black and Yellow, Bay-headed, and other tanagers including the uncommon chlorospingus formerly known as the Ash-throated Bush-Tanager. Enjoy the show! 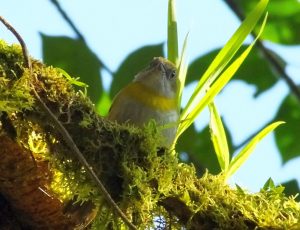 I was very pleased to finally get a shot of this uncommon probable endemic split.

Pretty easy access: La Marta is accessed by a road from the town of Pejibaye. Although there are time when the entrance road might require four wheel drive, for the most part, it is easy enough with a regular car. Contact them for updated road conditions.

Basic lodging and camping: If you want to stay there, the accommodation is cheap but very basic. Rooms are shared, mattresses are thin, there aren’t any mosquito nets, and the water is cold but it doesn’t cost much! Meals can also be arranged for a good deal, and camping is possible.

Lots of trails in good habitat: This is one of the few places I have seen in Costa Rica that have kilometers of trails. All of the trails go through forest, a fair bit of which is habitat that has grown back over a hundred years and includes many non-native Poro trees. I suspect this affects the avifauna somewhat but maybe not too much because it’s connected to large areas of mature, native forest, and the back trails access more of that habitat. Limited time kept us on trails much closer to the HQ, and those were good enough but I wouldn’t be surprised if the ones way back in the reserve hosted rarities like Black-banded Woodcreeper, Sharpbill, and many other uncommon species. 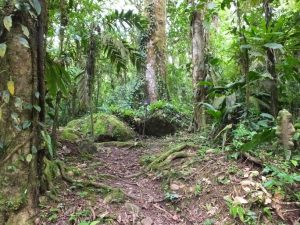 Uncommon species: Speaking of rare birds, these are some of the “good” ones we saw or heard among species already mentioned:

Tawny-chested Flycatcher- fairly common on the road near the buildings!

Although we did not see Sunbittern, nor Tiny Hawk, both of these are regular at La Marta. 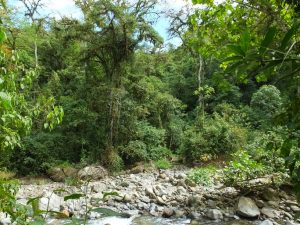 Lanceolated Monklet: Saving the best for last, um, yes, based on this past weekend, La Marta might be the best site for this species in Costa Rica. It’s a pain to see no matter where you go but since we had two different birds in one day, and the trails access lots of suitable habitat, seeing the monklet at La Marta is a fair bet than many other sites.

I would love to go back, although next time, I hope I can survey the more remote parts of the reserve to look for ground-cuckoo, Gray-headed Piprites, and various other rare species.