For the past few weeks, most of my birding has taken the form of scouting for the Global Big Day on May 13th. Since I plan on starting shortly after midnight, I will actually be celebrating this modern birding holiday in a matter of hours. Hopefully, all of that scouting and planning will pay off with a Lovely Cotinga, hawk-eagles, and enough singing birds to push our total over the 300 species mark. The good thing is that if that doesn’t come to pass because of rain (very likely chance of precipitation) or other factors, it’s still going to be a great day of birding pretty close to the home base. 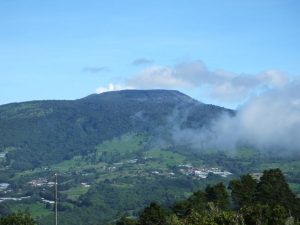 A view of Poas Volcano- not erupting on this morning.

Since much of that scouting involved the Poas area, I figured that it would be pertinent to give an update on the birding situation around there. Aside from scouting Varablanca, Poas, and Sarapiqui, since I also got in a nice day of guiding at Carara, I figured I would talk about that too.

The Poas situation: If you hadn’t heard, the park is closed because the volcano started erupting a month ago. Although activity has calmed down somewhat, the park is still off limits and probably won’t be opened for several months or even years. That said, don’t write off birding up in those mountains yet because you can still see quite a few good highland birds on the way to Poas and around Varablanca. 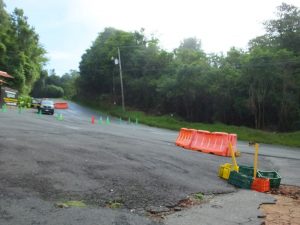 The barrier on the road up to Poas just after the Poas Lodge.

At the moment, the road is closed around three to four kilometers from the edge of the national park. This means that although the best highland forests are now off limits, you can still see most species in patches of forest from the village of Poasito up to that barrier, AND, with very little traffic. Unfortunately, Sooty Thrush, Highland Tinamou, Fiery-throated Hummingbird, and most Peg-billed Finches are now beyond that barrier and therefore inaccessible but you can still see both silky-flycatchers, Prong-billed Barbet, Large-footed Finch at a few sites, and most of everything else including chances at Resplendent Quetzal. Fortunately, the Volcan Restaurant is still open as is Freddo Fresas; two sites with hummingbird feeders and riparian zones.

Try Varablanca: The area of Varablanca is very much open and accessible and because it’s around 45 minutes from the airport, continues to be a good site for a first or last night on a Costa Rica birding trip. Accommodation options include Poas Volcano Lodge, Poas Lodge, The Peace Lodge, and a few other spots. A fair number of highland species can be seen around accommodation, in riparian zones on the route towards Barva, and in the area between there and Socorro.

Carara: The Carara area is always good for birds no matter when you visit. Now is especially nice because the wet weather has resulted in lots of singing birds, good activity, and temperatures a bit more comfortable than the blazing Carara furnace from February to April. On my recent trip, we had Crane Hawk and good looks at Collared Forest Falcon on the Cerro Lodge road, several singing Northern Bentbills on the national park forest trail, excellent looks at Golden-crowned Spadebill at the bridge, 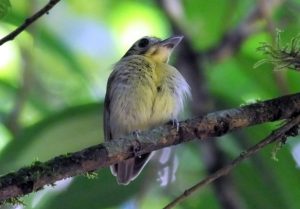 good looks at vocalizing Long-tailed Woodcreeper (future split), trogons, excellent point blank views of Streak-chested Antpitta, Red-capped Manakin, and other expected species. What we didn’t have were many hummingbirds, nor many parrots. We still had plenty of macaws but very few other members of that esteemed family. 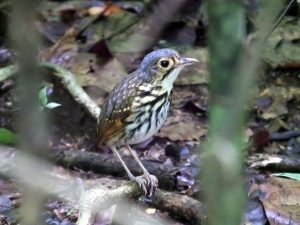 One of the close Streak-chested Antpittas, hopefully these will be recorded during the Global Big Day.

Hope to see you in the field. To learn about more sites for birding in Costa Rica as well as how to find and identify birds in this biodiverse country, see my e-book “How to See, Find, and Identify Birds in Costa Rica”. It can be purchased through Kindle as well as PayPal, just follow the link. I will transfer the book within 24 hours of confirmation of purchase.