Most folks don’t consider any degree of pelagic birding when visiting Costa Rica but if you have an extra day or two, and enjoy birding from a boat, it will be worth your while. Get into the pelagic zone and at least three species of storm-petrel, two shearwaters, and a few other birds are likely along with a real chance at rarities like Tahiti Petrel, Parkinson’s Petrel, Galapagos Petrel, Christmas Shearwater, and so on. We still need to get a better handle on which species show up when and where but as long as you head into the pelagic zone, you will be in for some exciting birds. The main problem with that has been finding boats to take folks to the places where the shore is out of sight but, hopefully, it will be easier to arrange such trips soon.6

In the meantime, if you want an easy, quick “pelagic”, you can always take the Puntarenas-Paquera ferry. Although you can never expect too much in terms of blue water birds, there’s always a chance at storm-petrels, Brown and Blue-footed Boobies, Brown Noddy, Bridled Tern, and who knows what else? Uncommon species and Costa Rican rarities of every spectrum have been seen including Sabine’s Gull, Red-billed Tropicbird, and even Peruvian Booby. At the same time, you can also take the ferry and have your most exciting birding be limited to Black, Royal, and Sandwich Terns but since the trip is so easy to do, and something different usually shows up anyways, I believe that doing a bit of ferry birding is always worth the effort. If you are up for it, here’s some stuff to keep in mind when ferry birding in Costa Rica:

The ferry won’t stop for birds– Yes, that is a “Captain Obvious” statement but just a reminder that ferry birding won’t be as birder friendly as a true chumming, bird chasing, pelagic trip. You won’t see as many birds but I still think that the ferry kind of makes up for it with the low cost, easy logistics, and birding opportunities especially when you can’t arrange a true birding trip to the pelagic zone.

Get in line early to find space on the upper deck– You want to get a coveted spot on the upper deck because you will see more birds. The ferry is usually stable enough to use a scope, and it’s also short enough (about an hour and a half) to make sea sickness an extremely rare event. Getting there about an hour before departure time should work. If you arrive in Puntarenas before then, park near the lighthouse and scope from there. I have seen pelagic species from this spot on more than one occasion (by that I mean three species of storm-petrels, Brown Noddy, and Galapagos Shearwater). 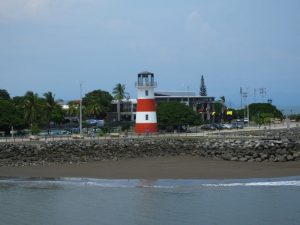 Day trip? Much cheaper to park the car in Puntarenas– When I do the ferry (as I did with friends yesterday), I park at Frank’s Cabinas for the day and pay around $1.50 for a ferry passenger ticket (yep, that adds up to around $3 round trip). Frank’s Cabinas is half a block north of the ferry dock and has a prominent sign. It tends to fill up on the weekend and he charges around $10 to park there for a day. If you do take a vehicle across, it is around $45 each way.

Consider the 5 a.m. ferry– Since the next ferry doesn’t leave until 9, you will probably see more birds by taking that first ferry at dawn. Although I have seen quite a few birds at other times of the day, I plan on embarking on the five a.m. ferry on my next trip. I would have already done so but have always felt pretty reluctant to leave the house by 2:30 or 3:00 a.m. Although this means that you could mix owling and potooing with an early ferry ride, you can also just stay at Frank’s Cabinas the night before. He charges around $50 for a room that includes the most important factor for steamy Puntarenas; air conditioning.

Bring the car and make a day or more of it– Likewise, you can also take the ferry across with a vehicle like so many other non-birders on the boat. This is worth it if you will be spending one or more nights in the southern Nicoya Peninsula or if you just feel like combining birding on the ferry with a day of birding near Paquera and in the southern Nicoya. Do that and you might end up with a day list that includes Galapagos Shearwater, Blue-footed Booby, Elegant Trogon, and Ivory-billed Woodcreeper. 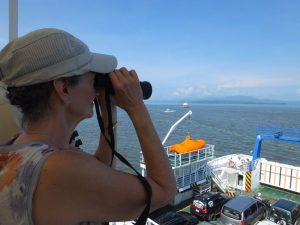 Be ready for anything– Most of all, when birding from the ferry, just be ready for anything. When we take into account that the ferry crosses part of a nutrient rich gulf that has seen rather little birding coverage, you have to be open to the possibility of rare and unexpected species showing up. By definition, this means that species like Inca Tern and Nazca Booby are far from regular, but they just might show up when you take that boat. The highly pelagic White Tern has been seen in the gulf, who knows what else might fly into view? I know that every time I have taken the ferry, one or more interesting species have occurred. On the trip yesterday, although I had hoped and sort of expected to see Brown Noddy, Bridled Tern, and at least one storm-petrel species, instead, we were surprised with a Parasitic Jaeger, and then a Pomarine Jaeger not long before the boat reached Puntarenas on the trip back! Both of these were excellent year birds and tough birds to see in Costa Rica even when they are expected. With that in mind, I should mention that Parasitic Jaeger has been seen during the summer months in Puntarenas in the past. 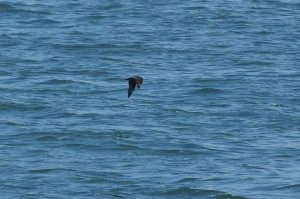 The dark juvenile Pomarine Jaeger that sadly flew away as soon as we saw it.

Yesterday, I picked up three year birds and although there wasn’t as much avian activity as on other occasions, I can’t help but wonder what showed up earlier on or later in the afternoon. Which species flew across the path of the ferry today? You never know unless you go and since it’s an easy trip to do, keep it in mind when birding in Costa Rica. Ideally, I hope I can bird from the ferry at least twice more this year. To learn more about where and how to bird in Costa Rica, support this blog by purchasing my 700 page e-book, “How to See, Find, and Identify Birds in Costa Rica”. I hope to see you on the ferry or elsewhere in the field!