I hope you are reading this today because by “now”, I mean July 20th, 2017 or shortly thereafter. If you are seeing this post some other month or some other year, the Quebrada Gonzalez sector of Braulio Carrillo National Park will still be worth a visit because, after all, the dense foothill/lowland rainforest at this site always offers chances at connecting with a variety of uncommon and rare species. If you happen to be headed there over the next few days, though, the odds are in your favor for finding some mega birds.

Based on guiding there yesterday and recent eBird sightings, these are some reasons why now would be a great time to visit:

Quebrada has been getting a lot of rain. I say that with a sincere sense of relief and hope because much to the detriment of a forest in need of near constant moisture, the site has suffered from warmer and drier than normal weather over the past five or so years. Since most bird species at the site seem to have declined, hopefully, this year’s precipitation will result in a healthier forest ecosystem along with subsequent improved nesting success and more food for altitudinal migrants. Based on the number of fruiting trees seen yesterday, it looks like the forest is reacting well to the much needed precipitation and humidity. Several Melastomes were fruiting as were some understory Lauraceous species (think small avocado type fruits), and other trees.

The wet foothill and middle elevation rainforests of Costa Rica are sort of infamous for their mixed flocks. After periods of quiet birding, large groups of birds suddenly rush through the forest to tantalize, frustrate, amaze, and entertain the unwary birder, and Quebrada is no exception. It’s an excellent site to connect with fantastic mixed flock activity but, you can also visit and run into very few or no flocks. I’m happy to say that yesterday, the mixed flock activity was reminiscent of better birding days. We ran into several groups of birds, and although some were pretty hard to watch as they silhouetted their way through the canopy, we still had plenty to look at and fewer slow periods than any visit this year. Flocks had most of the expected tanagers, we had one Sharpbill, Red-headed Barbet, more than one shrike-tanager, Striped Woodhaunter, and I am sure there were other species missed because of less than ideal viewing conditions. 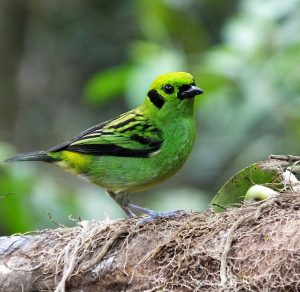 Emerald Tanager is one of the expected species here, we had several.

More fruit also means better chances at running into fine targets like Yellow-eared Toucanet and Bare-necked Umbrellabird. These were both recently reported from the site on eBird and although we didn’t find them, now might be the best time to look. Since those species are around, the same can also probably be said of another choice frugivore, its royal blue and purpleness, the Lovely Cotinga. More fruit on the forest floor also means better chances at seeing quail-doves; we actually had great looks at four Olive-backed Quail-Doves over a full day of birding.

Although it also makes for a chance of rain and silhouette canopy views, the overcast skies sort of make up for it with more bird activity. Since that coincides with higher chances of seeing more birds, yes, you want to be there on a cloudy day. Ideally, some sun will also happen as it did yesterday with subsequent views of King Vulture and Great Black Hawk from the overlook on the Ceiba Trail. 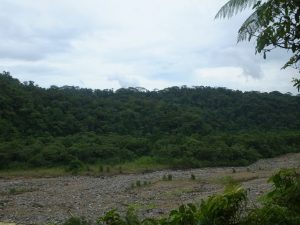 The view from the overlook.

They might look dull and confusing but the more juveniles the better and not only because they represent new generations of tanagers. Although that is part of the happy equation, more juvenile birds around also means that more predators like Tiny Hawk and Barred Forest-Falcon are active. Who knows, maybe Black and white Hawk-Eagle or other rare choice raptors could also be around?

Saving the best for last, this is the main reason why you should go birding at Quebrada now. Yesterday, there was a diffuse antswarm working its way through the northern side of the Las Palmas trail. It looked like it was spread through a fair sized area of forest and this could mean that it will be working that area for a few days. Maybe, maybe not, but it looked a lot like the one I saw some years ago that brought in a R.V. G. Cuckoo and Black-crowned Antpitta almost in the same area. On that occasion, the same swarm worked over the same area for at least four days. Although we didn’t see either of those megas yesterday, it looked like ideal conditions for them to make an appearance. Since most of yesterday’s swarm was back in the woods, away from the trail, they might have actually been nearby and just not foraging where we could see them. 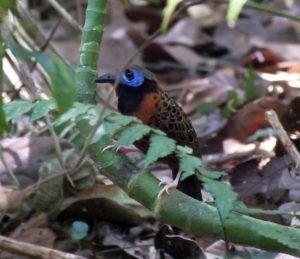 One or two Ocellated Antbirds were at yesterday’s swarm but they wouldn’t come in for a close, prolonged view like this one from Tirimbina.

I’m not sure if I can get back this weekend but I might give it a try. If you go, leave a comment about your sightings!