The world of birding is s small one, especially in these days of constant digital connection. Make the right “friends” on Facebook and you can receive updates from birding tours in Thailand, the latest avian temptations from Saint Paul, Alaska, and learn who was successful with the Swallow-tailed Gull twitch in Washington state, all in a matter of seconds. In state-sized Costa Rica, the birding world is even smaller. Go birding and you run into many of the same local players, we read about other’s reports, and we sign up for the same Christmas counts- always taken to a new level in birdy Costa Rica!

One of the local birders whom I had often heard about but just never personally met is Jose Alberto Perez. An artist also known as “Cope”, he lives right where the Caribbean lowlands meet the foothills and, for the past few years, has been showing birders why this part of the country is always worth a visit. After hearing about roosting potoos, owls, and a tame Thicket Antpitta, last week, I was pleased to finally have the chance to meet Cope while guiding someone focused on bird photography. Whether you prefer to point a camera at birds or use the binos, I can say for sure that any amount of time with Cope is time well spent. 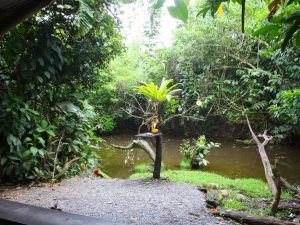 The Cope birding garden set up.

We started by watching the birds that came to his small but very productive pond and feeder set up. Although it was rather quiet during our visit, he can get a lot of birds in December (similar to high activity at that time of year at other feeders) including various tanagers, toucans, and so on. Nevertheless, it was still nice to have close looks at Pale-vented Pigeon, hermits, a Bronze-tailed Plumeleteer that dominated the feeders, and a few other hummingbirds while we sat in the shade and enjoyed the green surroundings. The vocalizations of Slate-colored Grosbeak and Striped Cuckoo from somewhere in the neighborhood reminded us of the high avian potential in the area as did Cope’s tales of American Pygmy Kingfisher, Russet-naped Wood-Rail, and the other birds that had visited his small garden. He also told us about our chances at seeing some roosting owls a short drive from his home. Since those chances sounded pretty good, off we went to see if we could connect with a Crested Owl.

He took us to a nearby road that had a surprising amount of good habitat. While most of the surrounding lowlands are deforested, rivulets of primary forest apparently persist along rivers and streams and there are also areas of birdy second growth. The trees were very tall in the place we visited and they did indeed harbor many birds. While Cope checked a couple of spots for Crested Owls, I heard White-ringed Flycatcher and a few other lowland forest species, and we had flyby Brown-hooded Parrots. Since he has had all three hawk-eagle species in that area as well as Agami Heron, Semiplumbeous Hawk, and Purple-throated Fruitcrows further down the road, I can’t help but wonder what else might live around there. Hope I can do a dawn survey some day.

What also became apparent was Cope’s keen understanding of the avifauna in his patch. He explained where two pairs of Crested Owls often roosted and where he usually finds Spectacled Owls. Uniform Crake was further back in the woods, a bit too far for us, and the friendly Thicket Antpitta hadn’t been singing for a while, but he did have a nest of Black-capped Pygmy-Tyrant, and there was one more Crested Owl roost to check. After he checked the nest, he also came back and told us that yes, the Crested Owl was on its roost. After a short walk into the forest, there indeed was the nest of the tyrant, and the Crested Owl! 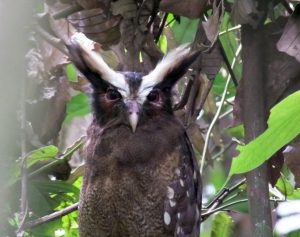 As is typical for this species, it was roosting fairly low in a spot with hanging dead leaves.

After plenty of satisfying views of this striking owl species, we went back to the tyrant nest and listened to its insect-like call while waiting for it to descend. The call was fitting for a bird the size of a large beetle and because of those miniscule proportions, our only chance at a photo was waiting for it come on down out of the canopy. The only problem with that strategy was Cope’s ability to find roosting birds. Before the tyrant flew down, he waved us over saying that he had found a roosting Spectacled Owl. Since owls tend to trump every other bird, especially ones as small as an insect, we followed him to the viewing spot, and there indeed was our second species of owl in 30 minutes! 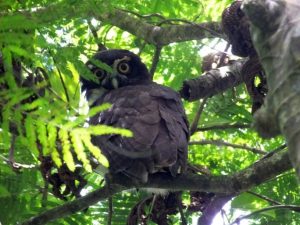 Spectacled Owls are fairly common but still never as easy as Great Horneds up north.

Sure enough when we came back to the tyrant stake out, the tiny thing had already come and gone but an owl is always a good excuse and with limited time, you can’t see everything (although that never stops me from trying or wishing that we could!).

At other times, Cope can have roosting Great Potoo, White-tipped Sicklebill in the garden, and might even know of an area for Red-fronted Parrotlet. He can also usually show you Honduran White Bats, is very much connected with his patch, and will do what it takes to help you see birds, frogs, and whatever else he might have up his sleeve. In these times of disconnection from nature, it’s always nice to spend time with other people who still have that connection. Cope is one of those people, I look forward to my next visit.

2 replies on “Birding in Costa Rica with “Cope””

I have been researching a trip to Costa Rica in 2021 and had come across Cope Arte. I have seen the website and watched the youtube videos but everything is in Spanish. There isn’t any email address to contact this location.

@Cheryl, please email me at [email protected] and I will see what I can do.