Migration! For the birder, few other words work better at sparking a sense of excitement than that one. Ross’s Gull should, along with Bare-necked Umbrellabird, Wilson’s Bird-of-Paradise, and a text that says, “Golden-winged Warbler seen this morning in Wales” but those are either target species or one-time mega jackpot birds. Migration, on the other hand, is the expected change of the seasons that brings equally expected waves of birds. Further excitement is brought to the equation by not exactly knowing where the birds will settle down but also realizing that flocks of wood-warblers just might be foraging in a nearby park. Best of all, you know that a few choice lost species are out there, somewhere in a 100 mile radius. You have to put in the hours to increase the odds along with getting super lucky to connect with them, and chances are you won’t. But, while looking, you will see lots of other species that only pass through your neighborhood during the short, birdy time frame of migration. 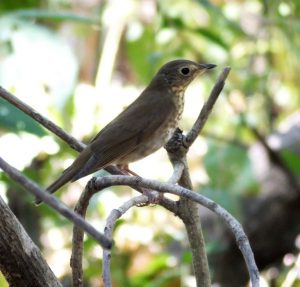 In Costa Rica, the birds that Buffalonians saw in September and August have just arrived in numbers. Many will stay, many will keep on going south to the subtropical forests of the Andes or wintering sites further south. When they pass through here, as elsewhere, thrushes, warblers, vireos, and tanagers gather at fruiting trees and feast on whatever bugs and larvae they can find. Given the heavy life-inducing rains experienced in Costa Rica in 2017, I bet that the migrants are well fed as they pass through my surroundings. It looked that way the past couple of days while I checked green space near the house. One fig laden with fruits has been acting as a constant smorgasbord for everything from Tennessee Warblers to Swainson’s Thrushes and Scarlet Tanagers sharing tree space with many Clay-colored Thrushes, Great Kiskadees, and Blue-gray Tanagers among other birds. Up above, a few species of swallows zoomed around to catch bugs associated with the fruit and were joined by occasional swifts (Vaux’s and Chestnut-collared so far). No cuckoos yet but they are out there, others have seen a few.

At night, I also listen to the sky, hoping to hear a Veery, Gray-cheeked Thrush, Upland Sandpiper, and cuckoos (because I count heard birds on my year list). So far, it’s only been the Spring Peeper notes of many a Swainson’s but I will keep my ear to the sky. I doubt the cuckoos will call (I kind of doubt they call much during migration) but that doesn’t keep me from having their rattling, bubbling vocalizations in mind.

During the day, although my search for migrants has mostly been limited to the Central Valley, that will change soon during a weekend of guiding near the Caribbean coast. Down that way, while reveling in frequent views of common migrants like Red-eyed Vireo, Eastern Kingbird, pewees, and so on, I hope I can also connect with Bay-breasted Warbler, and less common migrants still needed for the year. There’s always a chance of finally espying a very rare for Costa Rica tail-wagging Palm Warbler, Northern Parula, Black-throated Blue-Warbler, or some other lost bird, and I will be hoping to add Semiplumbeous Hawk and some other choice species to my year list. After the sojourn to the Caribbean, hopefully, during the following week, I can take a trip to the ocean on the other side of the country to see what’s happening with the shorebirds, terns, and other species that use the Gulf of Nicoya. If all goes as planned, these migration times will bring me very close to or put me over my year goal of 700 species. In the mean time, even if I don’t find a lost bird or two, it’s all good in the birding hood because I will still be seeing a heck of a lot- that’s just what happens when you are birding in Costa Rica. 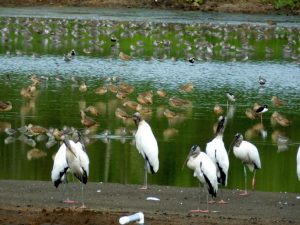 Waders are a pleasant break from forest birding.

If you happen to be visiting Costa Rica during these migration times, please take the time to count the Tennessees and other not so exciting species (because you see them up north). It’s all valuable data and the more we know, the better we can give migrants what they need during their crazy biannual journeys.