Irazu is a volcano that dominates the eastern skyline of Costa Rica’s Central Valley. If you didn’t already know that a big old crater was hidden up there on top, it would be hard to imagine that the mountain out there to the east is actually a link to the molten underworld. From my back window, all I can see is a rocky massif topped with antennas and it looks so close I wish I could fly to it right from my back window. On hot days, I would swoop high over the winding mountain roads, small farms, and houses to cool off at those breezy 3,000 plus meter elevations. It would be especially nice to glide over there in the dark of the night to hang out with the saw-whets sans spots and investigate the whereabouts of Great Horned Owl and maybe even Stygian Owl. The Great Horned is mysterious and very rare in Costa Rica but has been heard up there on Irazu. As for the Stygian, that would be a major new mega country record and extension of its known range but who knows, there are a few tantalizing reports from Irazu.

The first wonderful thing about Irazu is that the volcano is in sleep mode. The second wonderful thing is that you don’t need wings to pay a visit. There is a very good road that leads right up to those antennas and an official national park. Head up there and you can see for yourself that there is indeed a deep crater up on top. Bring binoculars and you will also find that the birding is replete with a bunch of high elevation endemics including two key ones in the paramo; the Timberline Wren and the Volcano Junco. 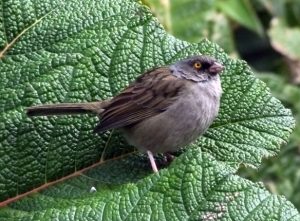 The junco always looks as angry as an active volcano.

Although you can’t find either of those species anywhere other than in the paramo habitats of Costa Rica and western Panama, they still aren’t exactly abundant. They eventually show but it might take a bit to find them, recently, I did that with a few friends and ornithologists visiting Costa Rica for a Partners in Flight Conference. The junco played well by sitting on a leaf right behind our cars but as usual, it took a little while to find the wren. However, we eventually did and all got nice looks at the highland endemic.

But that wasn’t all we saw on Irazu.

Lower down, in bits of forest near the Noche Buena restaurant, we got great looks at the rufous morph Costa Rican Pygmy-Owl that has been showing well since September, Black-cheeked Warbler, Yellow-winged Vireo, Flame-throated Warbler, and some other highland species. Although several of the more common birds refused to show (and activity was rather quiet overall), we also got looks at one of the rarest species on the mountain (and in many parts of its range). That special bird was a Maroon-chested Ground-Dove, a female that called from a perch in a riparian zone. A small population of doves are always up there, and as Ernesto Carman of Get Your Birds tours demonstrated earlier this year, you don’t need bamboo to see them. However, you do need that trio of factors typically required for many a shy bird-  time, patience, and luck.

The other great bird for me was the other year bird I got, a beautiful little Townsend’s Warbler. As for other birding news, over at Lago Angostura and Casa Tuirire, a Wattled Jacana has been entertaining local twitchers. I’m dying to twitch it for the country myself, I just hope it stays long enough so I can do that! While looking at the jacana, other good birds have also turned up, notably Pinnated and Least Bitterns along with the expected Snail Kite and a few other nice species.

On the Pacific side, the nefarious Masked Duck has been showing somewhere in the Coto area near Ciudad Neily. With luck, I might finally see this major nemesis bird of mine this weekend during a bird count at Cano Negro. If I do, should I give it the finger as some other birders do? I doubt I will do that. Instead, I might just give it the cold shoulder and pretend to ignore it.

And the last bit of birding news is the big Bay-breasted Warbler wave that has been inundating Costa Rica. We knew we were seeing a lot at Selva Bananito two weeks ago but we didn’t know that everyone else was also seeing a lot on that weekend and since then even in San Jose! A few days ago, Bay-breasted were even seen foraging on the paths of the university campus like sparrow wannabees.

If you are headed to Costa Rica in the coming days, enjoy the birding, it’s going to be good, especially with the cool temps we have been experiencing. Learn how to see, find, and identify the birds of Costa Rica with my e-book-How to See, Find, and Identify Birds in Costa Rica.