Just as with every place on the planet, this Mother Earth, Costa Rica has its own list of bird species endangered with extinction. On that list, we find such birds as the Yellow-naped Parrot (threatened by a nasty combination of habitat loss and capture for the pet bird trade), Yellow-billed Cotinga (habitat loss for that surreal beauty), and the Bare-necked Umbrellabird (yep, the big black bird with the pompadour also needs more habitat). Much of that list coincides with assessments made by BirdLife International however, there is one “new” bird that needs a new assessment by the world leader in bird conservation, and it needs it now. 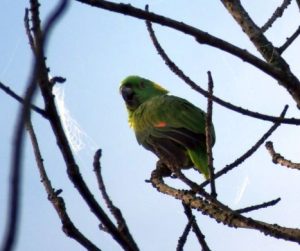 The bird in question is the Cabanis’s Ground-Sparrow. Formerly known as the Prevost’s Ground-Sparrow, this small brown bird with a fun, fancy face shares a common ancestor with the familiar Canyon and California Towhees of the western USA. In other words, it’s basically a tropical towhee. Given its evolutionary history and occurrence on coffee farms, I personally like the sound of “Coffee Towhee” for this striking sparrow. Not only does that place the bird where one often sees it, but it also invokes delicious thoughts of high quality volcanic brews, not to mention, the two words also just sound good together. Coffee Towhee also gives it more marketing potential, something that this bird really, truly needs. Perhaps that could be used in conjunction with “Comemaiz Rey” (King Sparrow), the local name for this species and one that also works to get people’s attention. Over at Birdlife, more good news in terms of marketing suitable names comes in the form of Costa Rican Ground-Sparrow, a moniker that might work best to help acquire funding to study and protect this endemic species. 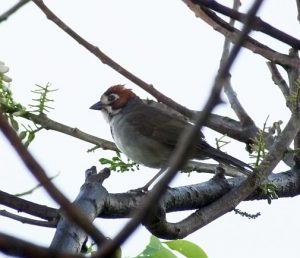 Yes, thanks to being split from the White-faced Ground-Sparrow of northern Central America, the towhee of the cafetales is our “newest” endemic, and although it doesn’t require mature forest, it nevertheless has a serious problem. Despite being a bird of scrubby vegetation, the ground-sparrow just happens to live exactly where most people in Costa Rica also reside. Always a bird of the Central Valley, it likely thrived in the combination of low woodlands and marshy, scrubby vegetation that covered much of the valley way back before the latter era of the Anthropocene. It showed its resilience as woodlands were replaced with rows of coffee plants, and continues to hang on in riparian zones, even in places where the sounds of traffic and presence of parking lots have become part of the natural scene. But, it hangs on in such places likely because it has nowhere else to go, and the bird isn’t exactly abundant there either. In fact, on another worrisome note, they are far from abundant anywhere.

As anyone who has birded any amount of time in Costa Rica can attest, this species is typically tricky to find, even in what seems to be appropriate habitat. Even taking skulking behaviors into account, based on years of experience, it appears to be honestly, truly uncommon and local in most of its very small range and has likely been declining for some time, especially with the steady conversion of its habitat into landscapes dominated by concrete and asphalt. Although the present assessment at Birdlife gives it a status of Least Concern, and that the bird is likely increasing, this just doesn’t jive with reality. In fact, the reasons given for the bird to not be included in the Red List don’t reflect what we see on the ground.

According to Birdlife,
“This species has a very large range, and hence does not approach the thresholds for Vulnerable under the range size criterion (Extent of Occurrence <20,000 km2 combined with a declining or fluctuating range size, habitat extent/quality, or population size and a small number of locations or severe fragmentation).”

Actually, it has a very small range (just 1,800 square km), its habitat is certainly declining in extent and quality, it has likely declined, and there seems to be severe fragmentation in various parts of an already small range).

I really don’t think there are any data to support this, and, based on personal experience and in speaking with others, field observations seem to always run contrary to this assessment.

“The population size is very large, and hence does not approach the thresholds for Vulnerable under the population size criterion (<10,000 mature individuals with a continuing decline estimated to be >10% in ten years or three generations, or with a specified population structure).”

Given the tiny range and paucity of observations in the best of habitats, it seems highly unlikely that the population is very large and more than 10,000 individuals. For example, when I survey an area of coffee fields that have this species, the most I have encountered are 5 individuals on the best of days as opposed to 20 Rufous-collared Sparrows in the same area. Granted, I could only survey along the edge of those fields but even with extrapolation to account for birds in the entire field, it doesn’t seem likely that the area could support more than 30 individuals. Sadly, on a note that further demonstrates the precarious nature of this bird, this population was likely impacted since a fair part of that site was recently burned and might be cleared for other use.

These factors point to the need for a more accurate assessment of this endemic species, and why it is probably Vulnerable or even Endangered:

–Impact by cowbirds, mostly Bronzed but maybe also by increasing numbers of Shiny (according to a study carried out by Stiles, this taxon was a preferred host for the cowbird).

-On the losing side of competition with White-eared Ground-Sparrow. A possible factor since Stiles and Skutch mention the White-eared being uncommon in forested ravines, the endemic ground-sparrow being common in coffee fields. For the past 15 years, White-eareds seem to be much more common in many coffee farms. 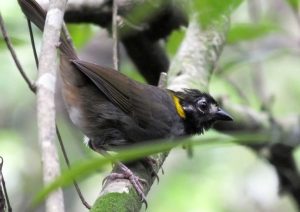 –Predation by feral cats. Although assessment is needed, given the abundance of cats in areas frequented by this species, this is likely yet another contributing factor that limits population size.

–Effects of pesticides. How does heavy pesticide use on coffee farms and other agricultural landscapes affect this species? An unknown but fewer prey items and unhealthy chemicals won’t do them any favors.

Fortunately, there are several people in Costa Rica who know how important it is to assess the status of this bird, including Ernesto Carman and Paz Irola of Get Your Birds! They actually have a Cabanisi project to help this endemic species that includes surveys for it and working with local farmers to educate and protect habitat. Soon, they will also be doing a Big Day to raise funds to help this bird species while also trying to break their own incredible Big Day record of 350 plus species! Click on the link to see how you can help protect Costa Rica’s newest endemic species, a bird that might actually be sliding closer to extinction.

This post is dedicated to Jenny Luffman, someone with whom I grew up with at Sacred Heart grade school in Niagara Falls, NY, and who died in an accident in 1998. She would have celebrated a birthday on April 8. She loved birds, if she had lived longer than her 20s, I dare say she would have become a birder, I think she always was and never knew it. She would have loved to have seen this ground-sparrow and many more. I hope that Jenny has been watching and laughing with the most beautiful of birds since the day of her passing.