The golden birding month of May is just about here and I know of more than a few birders up north who must be giving a collective sigh of anticipated relief. April wanes and yet the snow keeps coming back, and as much as folks in upstate New York are accustomed to the cold white stuff, eventually, enough is enough. It might even snow up there in early May but birders know that by the 10th, the birds should be migrating through local patches throughout the eastern USA and southern Canada, accentuating the fresh green of new foliage with equally bright feathers and eager song.

In Costa Rica, we are also looking forward to May but not for migration. Some birds like Red-eyed Vireo and Eastern Kingbird will still be on the move but most will have already passed through the country by then. No, we are looking forward to one day in particular, that of May 5th, the official date when thousands of birders across the globe will be celebrating Global Big Day by counting birds and putting those data into eBird.

I have been pleased to see that a lot of birders in Costa Rica are eager and ready to bird in most parts of the country. Many posted their routes more than a month ago and organizers are still working to get more birders on board to see if we can record every possible species, and hopefully a few more! Although I haven’t worked out an exact route, I do plan on participating and will once again see if I can break 300 for the day. While working out the logistics, I thought of a few suggestions and tips for Global Big Day in Costa Rica. These might also be applicable to GBD everywhere or when birding in Costa Rica any time of the year:

You can if you want but you don’t have to because there won’t be any secret birding police knocking on your door if you don’t begin the count at the stroke of midnight. Just bird as much or as little as you want but please put the data into eBird. However, if you do want to go nuts and lose yourself with birds beyond normal hours, there are one or two tips below that might help.

Scout if you can!

If you have time to scout your route, do so and as often as possible. Although those Golden-bellied Flycatchers that were always present for the past year can certainly take a silent vacation on count day, you will see more key birds if you scout for them. It’s also best to scout as close to count day as possible to know where fruiting and flowering trees are attracting hummingbirds, tanagers, and other count day delights. Not to mention, there might be some hidden wetland, roosting owl, or other chance at more birds that would otherwise be overlooked. 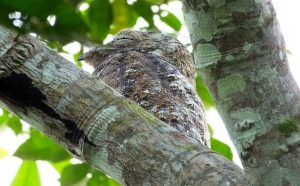 I want to get a Great Potoo for the day.

Make a plan and stick to it

If you plan on doing a serious Big Day or to shoot for a certain number of species, you really do need to carefully plan out the mad endeavor in advance. Take things like traffic, different habitats, and expected species into account, but most of all, be careful with the timing at each site and for driving between stops, and stick to those times on count day. If you stay longer for even ten minutes at a few sites, you won’t get those thirty or more minutes back. Allocate the appropriate amount of time for each stop as a function of the likelihood of identifying numbers of new species for the day and keep to the schedule whether the birds show or not!

The Lanceolated Monklet is not exactly reliable. Even if you see one the day before the count, don’t expect the anti-social featherball hermit to come out and play when you need it. Just stick to a well planned schedule, don’t worry, enough birds will show. Other birds not to fret because they are either few in number and/or are seriously unfriendly include various raptors, antpittas, Yellow-eared Toucanet, owls, and Great Jacamar. Give the unseen birds the one finger salute if it makes you feel better but don’t waiver from the schedule. 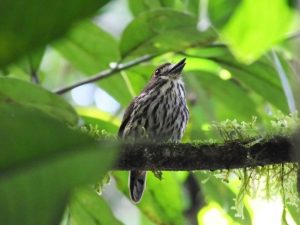 Will anyone identify a monklet in Costa Rica this May 5th, 2018?

This doesn’t mean that you need to practice the Chen Canon Fist form or get meditative with Yang 108  while also watching birds. Although that would make for quite the interesting video, and I would be seriously impressed to see someone carry out the “Teal Dragon Emerges from Water” movement while also calling out a vocalizing Scarlet Tanager, “Tai Chi birding” just means putting the focus on listening and watching for birds in as relaxed a manner as possible. Maintaining a high degree of concentration in a relaxed state during an exciting, bird filled day could indeed be a challenge but I guarantee that the birders who manage to do this will notice that hidden potoo, pick out the Barred Hawk conspiring to be a standard Black Vulture, and get more birds. If it makes you feel better, or cooler (as in Fonzi cool), you can also refer to this as “Jedi birding”.

Yeah, pretty much in that order. Make enough coffee for the day and some. Coca-Cola can also work but I prefer the java because it can be made as strong as one likes, and, based on all those Coca-Cola dissolving videos, must be better for you. Also, use quality coffee because this is a special occasion! Speaking of very special times, this is also why we want to celebrate throughout the GBD with serious chocolate. This means spending some extra Colones for extra dark chocolate bars that put the percentage of cocoa right on the front of the package, and staying away from the cheap, sugary perversions of the holy Mayan bean. Get the good stuff! It might help you see a monklet! Oh, and of course, once the counting is done, get out the bubbly stuff! That or some fine craft beers or whatever floats your boat as a celebratory drink, snack, or dance.

Most of all, enjoy GBD. Do it however you want and whatever way makes you most happy. The part I like the most is knowing that I am sharing the collective experience with thousands of other birders. I fricking love that.