I took a second class bus from the bowels of San Jose up and over Cerro de la Muerte (” mountain of death”) to the frontier-like southwestern lowlands of Costa Rica to get to my destination. It was ten hours on the bus, two of which involved slamming our way over a section of remote road that was seriously afflicted with potholes, but I finally reached my rendezvous with birding friend Dorothy MacKinnon just before nightfall. It was slightly too late to watch birds except for the Common Pauraques that flew off the road at our approach but still early enough to comfortably ford the river that runs just in front of our final waypoint, the Bosque del Rio Tigre Lodge. 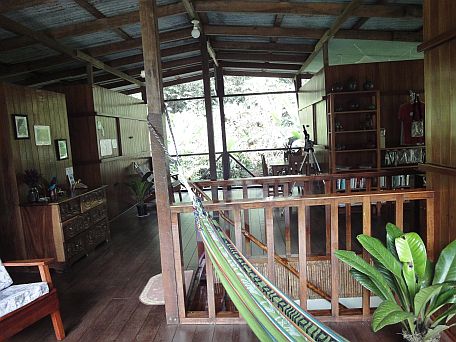 We were there to participate in the Bosque del Rio Tigre sector of the Osa CBC organized by Karen Leavelle of the Friends of the Osa. Our gracious hosts were Liz Jones and Abraham Gallo, owners of one of the best birding lodges in Costa Rica, the Bosque del Rio Tigre lodge. They were as welcoming as always and eager to discuss count logistics. With just 11 participants, it was going to be impossible to cover the count circle to the extent of other Costa Rican counts such as La Selva or Carara but we would do our best with two small teams covering major habitats as well as one person staying back at the house to maintain the yard and feeder count.

I had heard a lot about the excellent cuisine of Bosque del Rio Tigre and the tuna steaks and garlic potatoes for dinner on the evening before the count certainly surpassed my expectations. As I savored that perfect meal, I thought that if the birds didn’t cooperate, at least dinner was probably worth the long bus ride!

As with all nights before a CBC in the tropics, I went to bed before nine to essentially get up in the night. Sure, 4:30 a.m. is only thirty minutes or so before the light of dawn begins to faintly illuminate the surroundings but it’s still nighttime in my book. Because it is pitch black outside, I always have this strong notion that I should be sleeping as opposed to feeling disoriented as I fumble around with my flashlight.

Fortunately, I am able to make it to the washroom without knocking anything over or walking into a wall and fully wake myself up with cold water splashed on the face. Since I wisely prepared my gear the night before, I am ready to rock and roll in five minutes and head downstairs for coffee and banana bread.  As others come to the table, Liz apologizes for the fact that we aren’t having a proper breakfast and points out a variety of healthy snacks to keep us going until an early lunch. As we finish coffee and get ready to head off to our respective territories, the first birds of the day start to call. Someone heard Black and white Owl the night before so that is technically bird numero uno but the first for me is a Collared Forest-Falcon vocalizing from somewhere on the other side of the river. Getting a forest falcon at that crepuscular hour is pretty typical as is hearing woodcreepers and shortly thereafter sure enough, our next birds are a couple of dawn yodeling Cocoa and Northern Barred Woodcreepers. Another of our first calling birds is regular at the lodge but a new year bird for me- the tiny Yellow-bellied Tyrannulet. 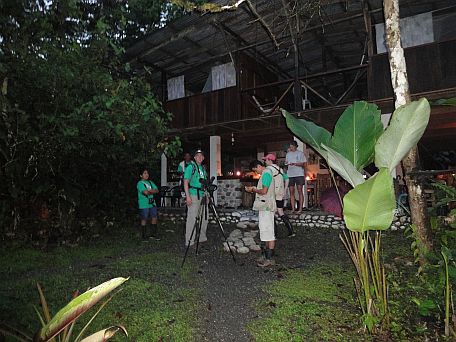 Just as everything seems to be starting to wake up and the light of day steadily grows, Liz, Dorothy, and I head up into the primary forest on the hillside behind the lodge on our way to an open area that overlooks a mix of pasture and forest. We quickly tick off forest species such as Black-faced Antthrush, Chestnut-backed Antbird, Scaly-throated Leaftosser (regular at the lodge), Golden-crowned Spadebill, Tawny-crowned Greenlet, Scarlet-rumped Cacique, and White-throated Shrike-Tanager. Dot-winged Antwren, Red-capped Manakin and Blue-black Grosbeak also get counted and just as we reach the horse trail that will take us to the open area, Gray-headed Kite calls from the canopy. In addition to its typical vocalization of steady, repeated notes, it also gives a strange rising call that momentarily tricks us because of its similarity to the calls of a young Spectacled Owl.

On up into the open area, we keep hearing new birds and actually see a few too now that it’s light out. The day is thankfully overcast but not so much to pour down rain and so we thankfully avoid getting roasted under the blazing, lowland sun. As we scan the treetops, Liz remarks how heavier rains than usual appear to have resulted in less fruit being available in the forest and so a number of frugivorous birds seem to have moved to lower lying areas in search of arboreal vittles. She says that because of this it’s kind of slow even though we have recorded 70 species by this time. 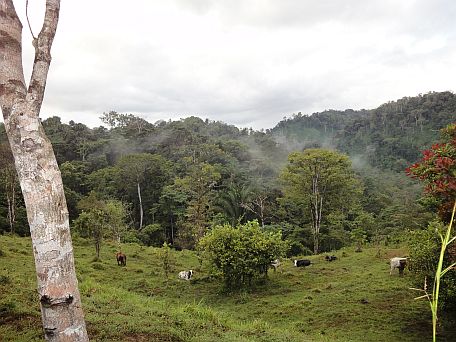 While scanning the forest canopy, I find one of our best birds of the day perched in a tall, bare emergent. It’s not very close but the light colored underparts and dark head tells me this is something good and when it turns its head to reveal a raptor profile, yep(!) it’s a Tiny Hawk! My first for 2010 and always a good bird, the thrush-sized little forest raptor lets us watch it for a few minutes before flying across of field of view. In flight it looks a lot like a small Sharp-shinned Hawk.

We leave the open area after that and count more forest birds as we make our way down to the Crake Trail and eventually to edge habitats near the river. The Crake Trails gets its name from the Uniform Crakes that are regular there. We look for them but despite neither seeing nor hearing any, keep moving because we just can’t dedicate the whole day to seeing that elusive denizen of wet thickets. It’s around this time that we also hear a strange bird calling. I know it’s a parakeet species but nothing I am familiar with and so guess that it could be a Brown-throated Parakeet. I can barely believe my eyes when I then briefly spot a long-tailed parakeet hanging out with a much shorter-tailed and expected Orange-chinned Parakeet perched at the top of a riverside tree. The only other long-tailed parakeet species in the area is Crimson-fronted Parakeet but this bird was most definitely NOT one of those! They fly off before I can get more than a one second look and it’s not enough to clinch an ID but amazingly, we hear it calling again and are thrilled to see it fly right into perfect light and perch in full view for 5 or so seconds. The pale eye ring accompanied by brown cheeks and throat show that yes it is most certainly a Brown-throated Parakeet and we can hardly believe our luck at getting this new species for the lodge on the same day as the CBC.

As the sun comes out, we get several more raptors- King Vulture, White Hawk, Gray Hawk, Broad-winged Hawk, Double-toothed Kite, American Swallow-tailed Kite, and Black Hawk Eagle. With 14 raptor species recorded for the day, I am pretty sure it’s my best day for raptors in Costa Rica! After sightings of Great Antshrike, two becard species, and picking up more key birds of the low, thick stuff such as our only Black-bellied Wren of the day and Slate-headed Tody-Flycatcher, we swing by a lagoon to get Neotropical Cormorant, Green Kingfisher, and Boat-billed and Yellow-crowned Night-Herons and get killer close looks at beautiful Marbled Wood-Quail before finally making it back to the lodge for lunch. After trudging around all morning in the uncomfortable yet requisite rubber boots, it’s a fantastic feeling to take that trying footwear off and sit down to yet another excellent meal.

Me looking serious (probably dazed by the humidity) and Dorothy enjoying an apple. 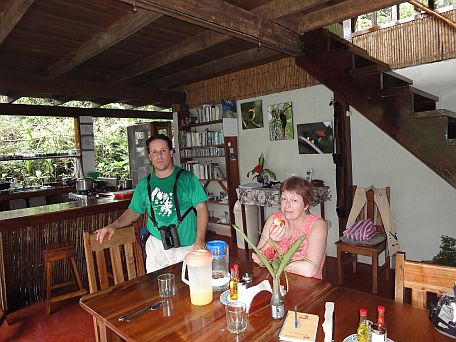 During lunch and some post lunch relaxation, the parakeet shows up again, this time with a brown-throated friend, and they amazingly perch in full view on a distant tree. As we watch those, it’s hard to decide where to look as a much prettier Turquoise Cotinga makes an appearance in the same tree and Little Tinamou and Blue Ground-Doves show up near the kitchen to eat rice thrown to the ground. Fruit feeders also attract quality bird species such as… 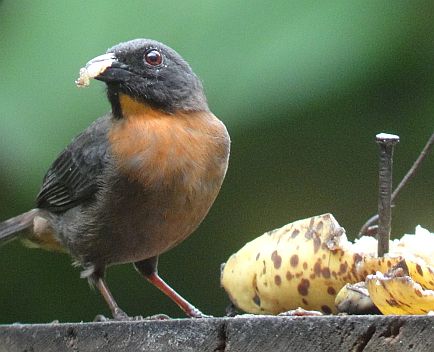 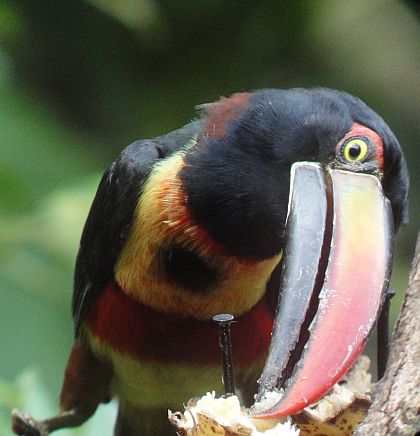 and two other mostly Costa Rican endemics, the Spot-crowned Euphonia, and 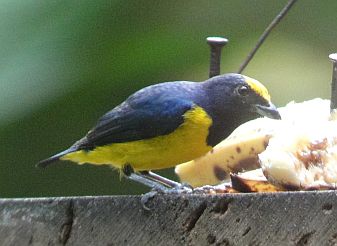 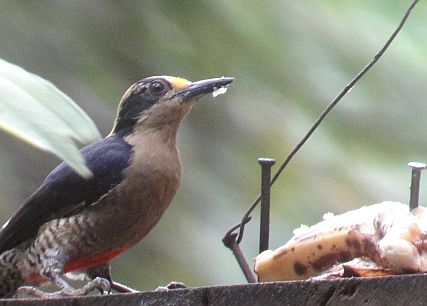 Although I kind of feel like just birding from a hammock for the rest of the day, as it would be blasphemous to shirk responsibilities on a CBC, I join the group in fording the river to walk through the village and hike up the Pizote River to make sure we don’t miss White-tipped Sicklebill. Birding is good (surprise, surprise) along the way and we record a bunch of usual edge and second growth suspects as well as Green Heron, Northern Jacana, Purple Gallinule, and White-throated Crake in roadside marshy spots.

The river walk is made challenging because we can’t see wear to put our feet in water made murky by the activities of gold miners (illegal) upriver. The sound of the rushing stream cancels out any and all bird calls which makes this segment of the CBC the least productive. There was gold at the end of the muddy rainbow however, as Abraham led us to roosting White-tipped Sicklebills! Another new one for the year, I hadn’t seen one of these crazy looking hummingbirds since I don’t know when so I guess the fear of slipping and drowning my camera in the brown stream was worth it! 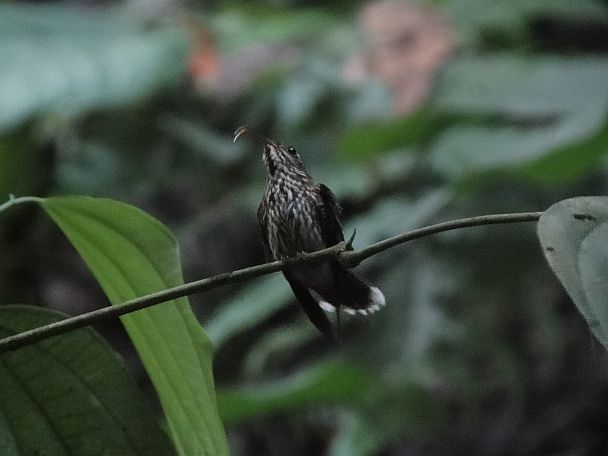 A fitting way to end a fantastic day of birding, we counted up results before yet another perfect dinner and came up with 205 bird species! Our team alone wracked up 144 for the day and still saw a dozen or more species the following morning. It will be interesting to see how many I get on the Carara count two weeks from now.

We couldn’t count wooden birds but we got the real ones anyways (Turquoise Cotinga, Barird’s Trogon, and Orange-collared Manakin). 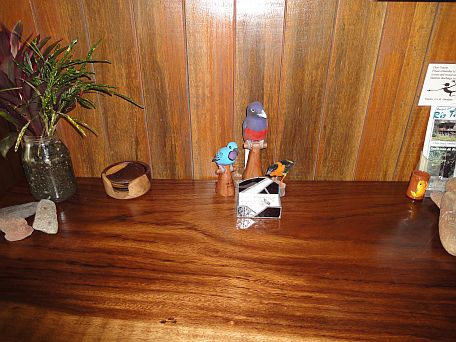 The Bosque del Rio Tigre Lodge has become known for being one of the better birding lodges in Costa Rica (and many say it is the best). It has received such accolades from guests who are on birding trips to Costa Rica for a number of reasons, among them such factoids as:

Bosque del Rio Tigre is certainly a top notch area for birding in Costa Rica but the real purpose of this post is to spread the word about their upcoming Christmas Count. A few have been held around the lodge in the past but Liz and Abraham are trying to make this an annual event to help promote conservation in and collect bird data for the Osa. This should come as no surprise as they have been involved with local conservation efforts since they opened and have become working hard at gathering data about and spurring efforts to study and conserve the Yellow-billed Cotinga.

And here is why I am announcing this on my blog: Participants are needed for the count!

It will take place on the 17th of December and counters can spend two nights at Costa Rica’s best birding lodge for discount prices. I’m not sure of the exact price but to find out and also learn more about the count, email the owners of Bosque del Rio Tigre. Family duties make it tough for me to get down to the Osa, but I sure hope to be on one of the 2010 counting teams!