This classic Costa Rican birding site became inaccessible after the earthquake on January 8, 2009. It is very likely that much of the habitat near the river was destroyed. Don’t make any plans to bird at Virgen del Socorro until further notice.

Last Saturday, I guided the BCCR trip to the classic middle elevation birding site of Virgen del Socorro. Even if we hadn’t gone birding, it would have been worth the curvy drive up the cordillera to escape the fumes and pot-holed asphalt of the central valley.

Our meeting place and time being the La Paz waterfall at 7 AM, we left at quarter to five from San Pablo de Heredia escaping the busy morning traffic just after the town of Barva de Heredia.  The fresh, humid air of cloud forest remnants was a welcome change from the car exhaust of the valley. I hope to survey this underbirded road sometime as there are some nice forest remnants along streams with stands of Alder and bamboo. We had a date with middle elevation birds of the Caribbean slope though and so couldn’t stop.

After cresting the ridge of the cordillera at Varablanca near Poas volcano, we began our descent of the Caribbean slope. Although much of the roadside had been cleared, there were extensive areas of cloud forest nearby; some of which reached the road itself. After a steep, curvy section we made it to our meeting place; the bridge at the La Paz waterfall. 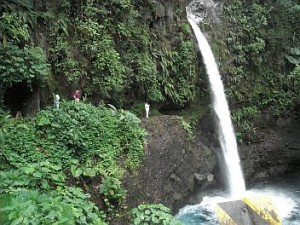 White-collared Swifts that roost behind the falls were zipping out of the spray in pairs while a Torrent Tyrannulet foraged on river boulders. Although we didn’t see any, this might be a good spot as well for White-chinned and Spot-fronted Swifts. About 5-10 minutes after the waterfall, we passed by Cinchona then drove at least a few more kilometers to the  turn-off for Virgen del Socorro. Watch for the sign for this inconspicuous road that requires a 180 degree turn to the right to enter it. 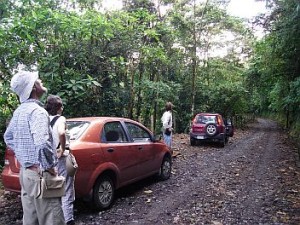 The road descends to a river that cuts through a forested canyon. We slowly walked down the road while non-birding Fred graciously took both cars to the bridge at the bottom of the road and waited for us. Although it was fairly quiet (maybe time of year) we heard both species of large Toucan as well as the constant singing of one of the most common species here; Tropical Parula. Despite constantly whistling like Immaculate Antbird (another common species here) not a one answered. Collared Trogons were pretty common, feeding on roadside fig trees. 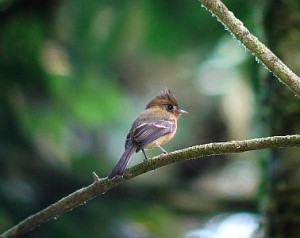 And Tufted Flycatchers were pretty common too- I at least got a good pic. of this friendly bird.

Some other birds we saw and heard on the way down to the bridge were: Smoky-Brown Woodpecker rattling away like a rusty machine gun, a Broad-winged Hawk (the most common hawk species in winter) hunting along the roadside, a few flybys of Brown-hooded Parrots, Red-headed Barbet, and a couple small mixed flocks with Slaty-capped Flycather (calling different from South-American Slaty-caps), Lesser Greenlet, Band-backed Wren, several Chestnut-sided Warblers, Wilsons Warbler, Golden-crowned Warbler and Common Bush and Silver-throated Tans. 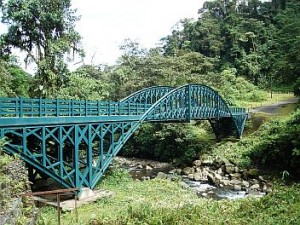 At the bridge, we enjoyed the peaceful rushing water and 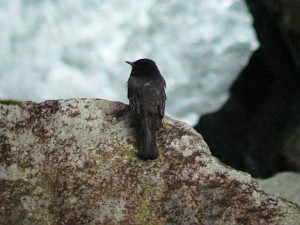 watched Black Phoebes- a bird more tied to bridges than any troll.

We also had American Dipper here; an indicator of a healthy stream. Sunbittern and Fasciated Tiger-Heron no doubt occur here as well although we didn’t see any this day. Venturing onto the trail into the forest just before the bridge on the right, I changed my tune from Immaculate Antbird to Lanceolated Monklet. This is a regular site for this rare species in Costa Rica that prefers stream banks in mossy foothill forest and is much easier to see in Ecuador and Peru. Like the hidden Immaculate Antbirds along the roadside, it also refused to repond. We did get lucky with a close view of Sooty-faced FInch, however; finally seeing one instead of hearing them call from dense undergrowth all morning. Shortly thereafter, we saw our bird of the day, a Nightjar!! 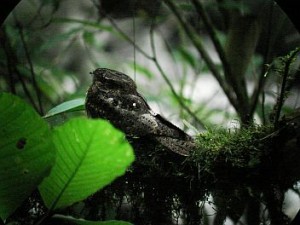 Roosting NIghtjars are tough. Books tend to show their best field marks in ideal conditions; just the type of situations in which one does not typically see them. We figured this was a female Chuck-wills-widow; probably a fairly common but little seen wintering species in Costa Rica. The head seems too big for Whip-poor-will, the tail too reddish, and most of all, the primaries too long. We couldn’t see the front or underside of the bird unfortunately and would like to hear from others about the ID of this bird. I hope it is a Chuck- I certainly put in my time for this species with all that whistling I did into the dark of southern summer nights in Illinois and Louisiana.

We didn’t see much of anything else on this trail but it looked promising for other rare species such as Scaled Antpitta, Green-fronted Lancebill and Bare-necked Umbrellabird (I have heard them here in the past). When I bird this trail at dawn some lucky day, I will post about it.

After the trail, we walked up the road a bit on the other side of the bridge and ran into a few more birds. Although we didn’t hook up with a huge mixed flock that this road is noted for, we did alright with Red-faced Spinetail, Russet Antshrike, Spotted Woodcreeper, Yellow-olive Fly, Golden-bellied Fly, nice looks at Bay Wren, Slate-throated Redstart, Tawny-capped Euphonia, Speckled, Black and Yellow, and Crimson-collared Tanagers, Green Honeycreeper, and excellent looks at Slate-colored Grosbeak.

Although this area is usually good for raptor species including Solitary Eagle, we only saw Vultures up in the sky! The closest we got to a White Hawk (fairly common here) only turned out to be the distant glare of a palm frond!

After birding VIrgen del Socorro, we stopped at Cinchona for coffee and as per usual were rewarded with amazing, close looks at a variety of Hummingbirds and other species coming to the feeders. We even had a mixed flock pass near the balcony, best bird being Barred Becard. 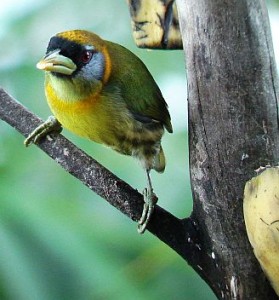 This is one of the easiest places in CR to see Red-headed Barbet. Here is a female. 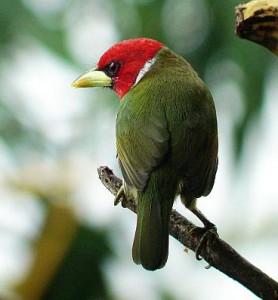 And this is the male. 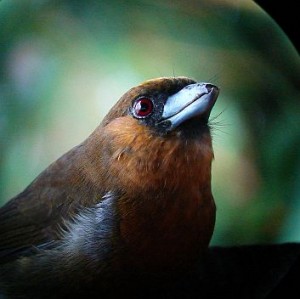 Its also a good place to see Prong-billed Barbets at arms length. 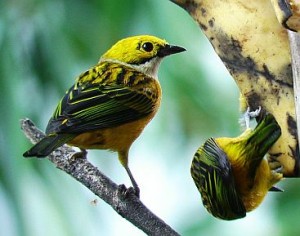 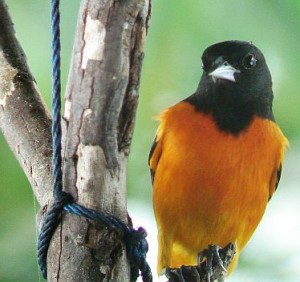 and Baltimore Oioles are back.

See my posting on Cinchona for more photos, especially of Hummingbirds. 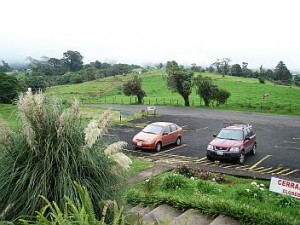 Luckily, the rain held off until we headed back up the mountain to Varablanca for lunch at Colberts- a French restaurant with excellent food (including home-baked goods!) that overlooks the Caribbean lowlands (where it is usually raining, so actually the view is mostly of clouds and mist). He has Hummingbird feeders as well with 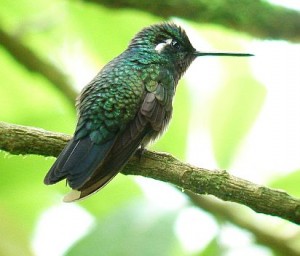 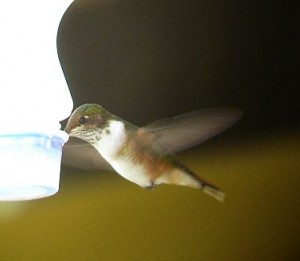 and Volcano Hummingbird being the common species.

Overall, a good day, best done with one’s own vehicle although buses are available from both San Jose and Puerto Viejo de Sarapiqui.