I never tire of watching wild parrots. Since I don’t exactly get tired of observing any birds, perhaps what I really mean to say is that an inescapable twinge of excitement accompanies every screech and sighting that can be attributed to any of Costa Ricas 17 Psittacid species.

Whether it’s the daily flyovers of Crimson-fronted Parakeets that screech from the skies above my house in the Central Valley, Scarlet Macaws that grumble from the canopy of the tall forests in Carara, or elusive Barred Parakeets that remind me of crossbills as they chirp and zip over the ridges of the high Talamancas, there’s always something special about seeing a wild Psittacid. I think “wild” might be the key word here because the parrots or macaws we saw in Niagara Falls, New York were either in the pet store or featured in television commercials. They just couldn’t be real, wild birds no matter what those bird books said because that would be just too cool to be fact. Therefore, every time I see a parrot, parakeet, or macaw in Costa Rica, I feel a flurry of excitement and recurring revelation that vanquishes my childhood doubts about the existence of such amazing birds.

Parrots in Costa Rica are as essential to the local landscape as Cecropia trees, Blue-gray Tanagers, and volcanoes and thank goodness because they add a bit of excitement to each day lived in this snow-free, tropical country. Not all are easy to see and there are identification challenges but I hope that the following information will give you a fair idea about what to expect as far as Psittacids go when birding Costa Rica:

Scarlet Macaw: Bold, brilliant, and loud, its pretty hard to miss this species. In Costa Rica, they used to range the length of both slopes but habitat destruction and persecution have nearly eliminated them from the Caribbean slope and reduced them on the Pacific slope to two, well-known populations, one at Carara and a larger number of birds on the Osa Peninsula. There is also a small population around the dry forests of Palo Verde and Curu, and they have been making a slow comeback on the Caribbean slope. 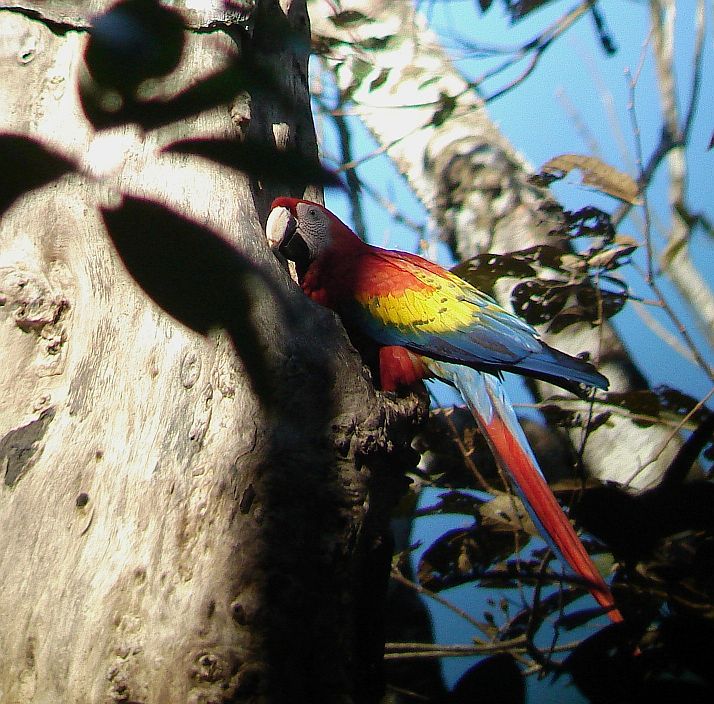 Great Green Macaw: This flagship species of Costa Rican conservation is kind of like the “sea turtle of the rain forest” in terms of its status and buzz about its plight. Like sea turtles, this bird is in serious trouble and needs as much help as it can to avoid going extinct in Costa Rica. The main threat to its future existence in Costa Rica is destruction of lowland rainforests and cutting of a tree that it very much depends upon, Dipteryx panamensis or “Almendro”.  Like Scarlet and Red and Green Macaws in southeastern Peru, the Great Green relies upen big, old growth Dipteryx species trees for nesting and as a food source. Unlike, macaws in Peru, however, Great Green Macaws in Costa Rica have not used nest boxes with very much success. This awesome bird can still be seen in the Sarapiqui area and is more common in Tortuguero and near the Nicaraguan border but I doubt that I will see it again at Quebrada Gonzalez (I used to see flocks there during the wet season).

Mealy Parrot: This large parrot is commonly seen in forested sites of the humid lowlands (although I get the impression that its numbers have decreased since I first came to Costa Rica). When perched, they are easy enough to identify but hard to see as they quietly forage in the canopy. Like most parrots, you are more likely to see them in flight. They are easily confused with Red-lored Parrots throughout their range and with Yellow-naped Parrots on the Pacific slope in the Carara area. Watch for the green front and pay attention to their harsh calls. 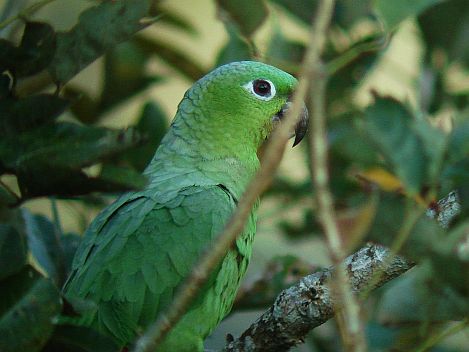 A Mealy Parrot attempting to hide behind a branch.

Red-lored Parrot: Another good sized parrot, this edge species is pretty common in the lowlands and is the only Amazona species parrot in Costa Rica with a red front. Its calls can sound similar to those of the Mealy Parrot but have a more ringing quality to them, like “clink clink” rather than the harsh squawking of the Mealy.

Yellow-naped Parrot: About the same size as the Red-lored, trapping and habitat destruction have reduced its population although it is still regularly seen in a number of areas including Cerro Lodge, Santa Rosa and Guanacaste National Parks, and Palo Verde. As the yellow nape can be hard to see in flight, pay attention to its distinctive calls that have a human-like or “laughing” quality to them.

White-fronted Parrot: The smallest of the Amazona genus parrots in Costa Rica, is still flies with shallow wing beats but is more frequently seen in flocks than the other Amazona species and is fairly common in dry forest. Its yellow bill, white front, and red patch on the forewing also separate it from Mealy, Red-lored, and Yellow-naped Parrots. Listen for its more rapid, staccato-like vocalizations. 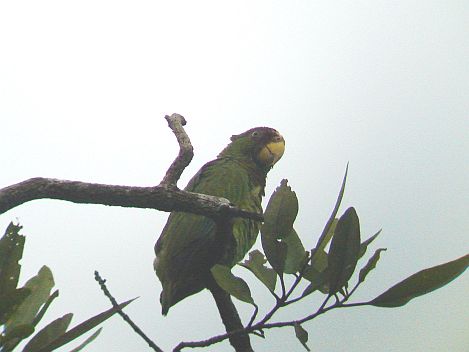 A not so great shot of a psycho-looking White-fronted Parrot.

White-crowned Parrot: This edge species is one of the more common parrot species in Costa Rica and can be seen from the lowlands to middle elevations (including green spaces in the Central Valley). The white crown and bill can often be seen in flight. Also listen for their screeching, “trebled” call. 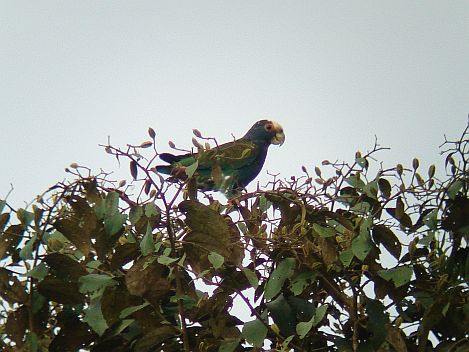 A White-crowned Parrot hanging out in the canopy at El Gavilan lodge, Sarapiqui region.

Pionopsitta genus parrots- one species, “a parrot that sounds like a parakeet” and has wingbeats in between those of an Amazona and Pionus.

Brown-hooded Parrot: A bird of rainforests, this species is most common in heavily forested, humid zones although it is also sometimes seen in flight over the central valley or other deforested areas (how I got it on my yard list). Watch for the red on the underwings, look for the brownish head, and listen for the rather musical, parakeet-like calls. That’s probably a bad description of their vocalizations, but is what comes to mind!

Pyrrhura genus- one species, a long-tailed parakeet of the Talamancas.

Sulphur-winged Parakeet: Like most members of this primarily South American genus, it has a small range and is the only parrot species restricted to the highlands of Costa Rica and Panama. It’s pretty common in the cloud forests of the Talamancas and is usually located by its high-pitched, reedy calls. It is the only long-tailed parakeet likely to be seen in its range although sometimes can overlap with Crimson-fronted Parakeets when they move to lower elevations. 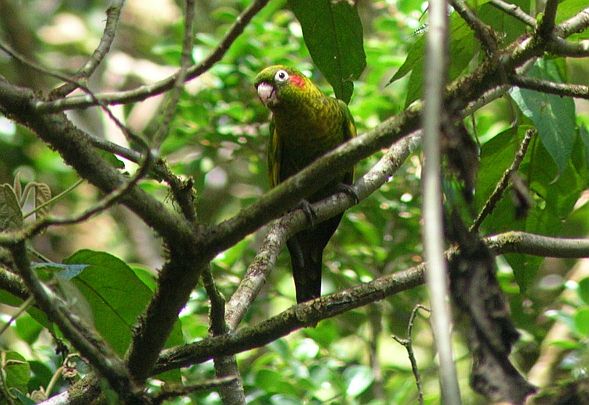 Sulphur-winged Parakeet from the Dota Valley.

Crimson-fronted Parakeet: One of the most common and easily seen Psittacids in Costa Rica, it has fortunately become adapted to nesting on buildings in the central valley. Long-tailed parakeets seen in the central valley are almost always this species. Watch for the red front and red underwings. 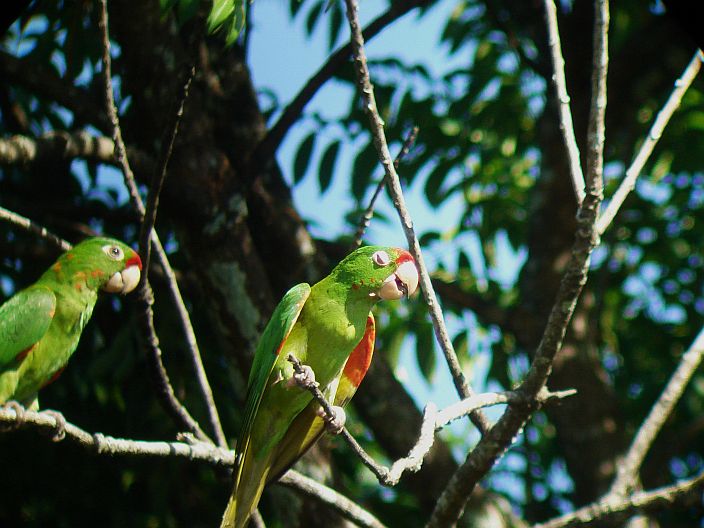 Crimson-fronted Parakeets- I see this species on a daily basis.

Orange-fronted Parakeet: This is the common, long-tailed parakeet species of dry forest. They overlap with the Crimson-fronted in the Carara area but can be told by their orange fronts and duller green plumage. 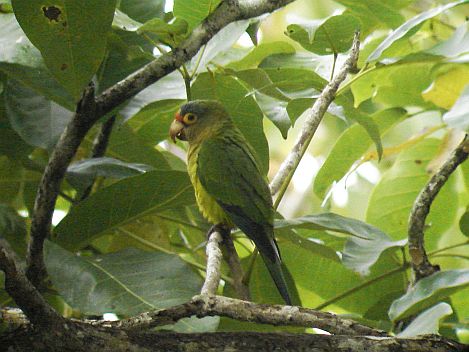 Brown-throated Parakeet: A recent invader from Panama, watch for it in southwestern Costa Rica from the Panamanian border west to Piedras Blancas National Park. It overlaps with the more common Crimson-fronted Parakeet but lacks the red front and has an orangey-brown throat.

Orange-chinned Parakeet: This common species vies with the Crimson-fronted for holding the title of the most frequently encountered Psittacid in Costa Rica. Any small parakeet with a short pointed tails seen in the lowlands is this species (it also occurs in the Central Valley). 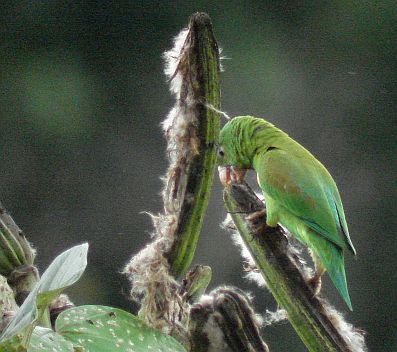 Barred Parakeet: If you are birding above 2,000 meters in the Central or Talamancan Cordilleras and see small, plain, short-tailed parakeets that remind you of crossbills or other “winter finches”, you have probably seen Barred Parakeets. They could overlap with Red-fronted Parrotlets at certain times of the year but those will show red and yellow in their plumage.

Red-fronted Parrotlet: If you see this one when birding Costa Rica, you will have hit the Psittacid jackpot. Not much is known about this species, it is seen very infrequently, and yours truly still needs a better look before counting it as a lifer! It mostly occurs in middle elevation forests and appears to make elevational movements in search of fruiting or seeding trees. Who knows, maybe it was more common in the past before so much of the Central Valley was deforested. I wonder about this because friends of mine saw a small flock for a few days in June in their urban backyard near Heredia! The birds were probably moving around in search of fruiting trees after breeding somewhere up in the Central Cordillera. They have also been recorded high up in the Talamancas as well as in lowland areas. If you see a small, short-tailed parakeet with red and yellow in the wings and lots of red on the head, then you may have gotten the coveted Red-fronted Parrotlet. On a side note, if you do see this species, take as many notes about its behavior, location, etc. as you can so we can get a better handle on its natural history.