During much of the year in Costa Rica, the song of the Striped Cuckoo is a common part of the auditory scenery. I hear them near my house singing from scrubby fields around the coffee plantations. I hear them call from the tangled second growth of deforested areas in the humid lowlands of the Caribbean and Pacific Slopes. It seems like any humid place in Costa Rica below 1,400 meters with enough edge habitat supports a population of  Striped Cuckoos.

They get overlooked though, because they tend to skulk. Like Anis, Roadrunners, and most of those Old World Coucals, the Striped Cuckoo is a terrestrial cuckoo species. It will ascend into the subcanopy of some edge trees or get up on top of some bush when it sings (and thank goodness because otherwise we would hardly EVER see them) but usually, it creeps around in dense, tropical undergrowth where it does who knows what. Sometimes, you can get lucky and see one take a dust bath on some blazing hot, lowland tropical track, or see one spread its wings and flash its black alulas. Is this a mechanism to catch more grasshoppers? To attract a mate? Evidence of madness? Who knows!

What I do know is that at least their song is pretty easy to imitate and often gets them to show themselves. 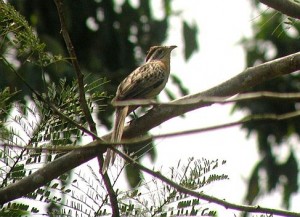 A Striped Cuckoo coaxed out into the open at El Gavilan in the Sarapiqui lowlands. 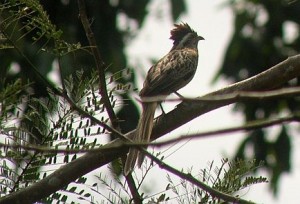 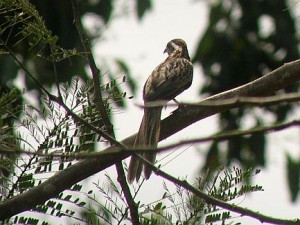 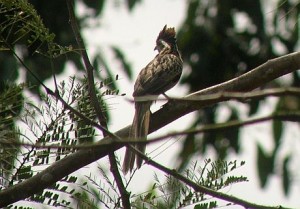 and raise it, over and over. It’s pretty cool to watch so I apologize for not having a video of it. 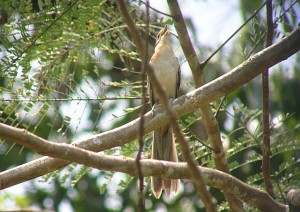 Here’s a frontal view of the same Striped Cuckoo.

When birding Costa Rica, listen for their clear, two noted whistle that might remind you of a Bobwhite, the first note lower than the second. They also have a longer song with a few lower notes that follow the second note.

This longer song sounds more like the much rarer Pheasant Cuckoo. By the way, if you ever see a Pheasant Cuckoo in Costa Rica, PLEASE let me know right away because there are very few sites known for this species in the country. The only regular site seems to be savannas near Buenos Aires although they have also been recorded from Carara in scrubby habitat near the crocodile bridge, around Esparza, and close to the Panamanian border near San Vito.

Why they are so rare in Costa Rica is another of those neotropical, bird distribution enigmas. I mean they aren’t too difficult in cloud forest near Valle Nacional, Oaxaca, are regular in Metropolitan Park, Panama, and are found in the Amazon of southeastern Peru (where I used to hear them just about every darn morning but never saw them!). Based on where they have been found, I suspect that their rarity in Costa Rica has something to do with them not liking the high amount of precipitation that falls here.

So, Pheasant Cuckoos are tough to see but they should at least vocalize if around so seem to be genuinely rare in Costa Rica as opposed to just being ridiculously shy and mute.

No picture of the Pheasant Cuckoo yet! One day though, I’m going to do surveys and run around the country whistling like a Pheasant Cuckoo until I figure out where they occur.