During our recent first family trip to Tambor (see previous post for all logistics) I also got in a good amount of birding. To be accurate, it was “digiscoping”, not birding. Although the two endeavors are similar, they are not the same.

When “birding”, I concentrate on looking for, identifying and studying all birds in a given area.

When “digiscoping”, I also concentrate on looking for and identifying birds, but focus on certain species and lighting situations likely to result in better photos.

On this trip, I decided to focus entirely on digiscoping, even leaving my binos at home. Although the binos would have been far better for the ferry (where digiscoping was impossible but the birding good), I still did OK looking for birds with my scope.

On the 5 AM ferry to Paquera, we saw very few birds as it was too early. Even at the Guayaba island sea stack, there were few birds flying around while in the day they are quite active with Mag. Frigatebirds and Brown Boobies for the most part. It’s probably worth scoping this sea stack for rarities. 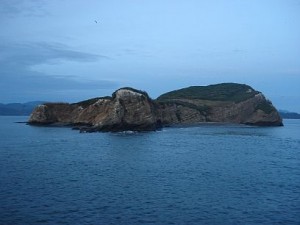 The ferry on the way back was when I missed my binos! Birds were fairly active under overcast skies that eventually spat down rain halfway through the trip. A scattering of Royal Terns and Brown Pelicans were present as we left the Paquera dock. The further out we went, I started seeing more and more Black Terns. Groups of  6 or so flew by the boat again and again until they turned into feeding flocks of dozens and dozens. It was at this point when I began to see a few other species too. A few Common terns were with them while an occasional Brown Booby flapped by. I managed to scope a Sooty Shearwater sharing a  driftwood perch with a smaller Black Tern. My best bird was my only lifer of the trip and one I had hoped for; While scoping through the flocks of Black Terns, I got onto an all dark bird flying low over the water. I immediately knew that I had a Storm Petrel! The two most likely species in the Nicoya gulf are Black and Least. Although I couldn’t see the shape of the tail, this bird was smaller than the nearby Black Terns and flew with quick, snappy wing beats. Since Black SP is about about the same size as the Terns, I got my lifer LEAST STORM PETREL! -On a side note, lifers will from now on be given capital letter status.

A brief 5 second look of a small, all dark bird zipping by and no one on that ferry had any idea of what I had just personally accomplished- lifer number 2527 caught on the fly because I kept scoping the waves despite spitting rain and pitching boat. The bird had accomplished quite a feat too; migrating from a cluster of rocks off of southern California to Costa Rica, avoiding 1000s of voracious Gulls, Jaegers and who knows what else along the way. The Skutch and Stiles guide says that Least Storm Petrel is common in the Nicoya gulf. Well, maybe they are further out, but that is the only one I have ever seen after several ferry crossings.

At Tambor itself, (the village, not the big Barcelo resort), we stayed at Cabinas Bosque. Birding around the Cabinas was fair with good looks at Green-breasted Mangos. The Nicoya Peninsula is probably the best area for this species in CR. Most were staying high up, hawking for insects. Luckily, my wife spotted this juvenile which favored a low perch.

A Common Black Hawk hung out in the backyard. 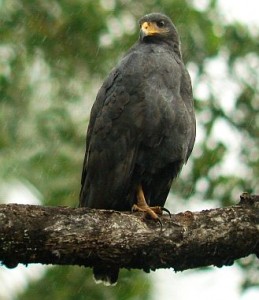 As did the most common Woodpecker in CR; Hoffman’s. Yes, looks and sounds a lot like a Golden-fronted. 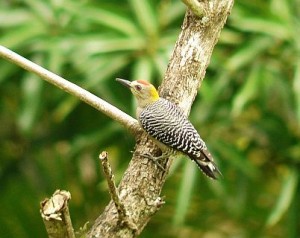 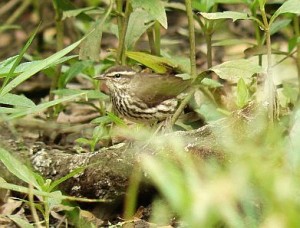 A good birding road and path is at the first right after the Cabinas Bosque, heading towards Paquera.  Staying straight on the road will take you to a path that leads through mangroves and to the beach. I spent most of my time along this road with good results. 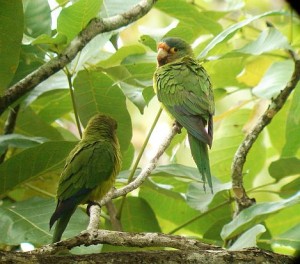 So were White-fronted Parrots like the one below although I couldn’t get a shot of one in good light. I also had Orange-chinned Parakeets, Red-lored Parrots and even heard Scarlet Macaw near the mangroves! 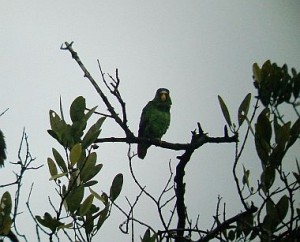 Dove diversity was especially high with 7 species recorded. Here is a pair of Common Ground Doves. 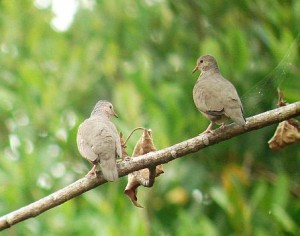 This was a good area to see common, second growth species such as Barred Antshrike. 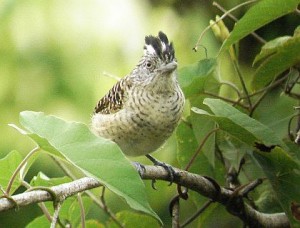 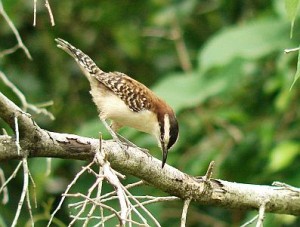 White-tipped Dove quick stepping it across a road, 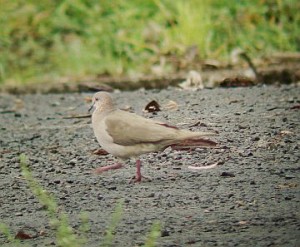 And witch-like Groove-billed Anis showing off. 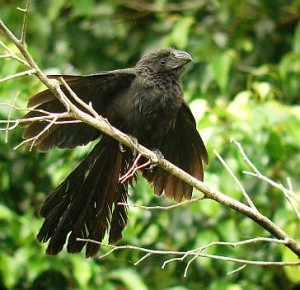 Near the mangroves, I was surprised to get excellent looks at Mangrove Cuckoo! 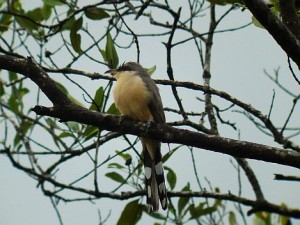 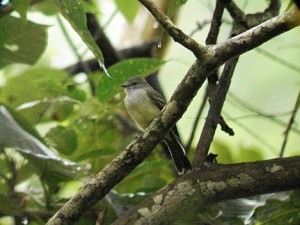 Got nice looks at Green Kingfisher too. 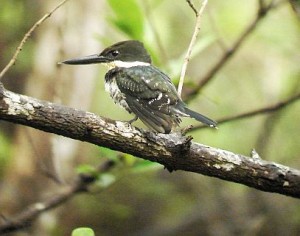 At the lagoon near the beach, there were a few Herons such as this Little Blue. 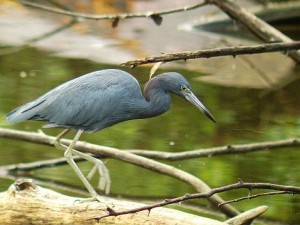 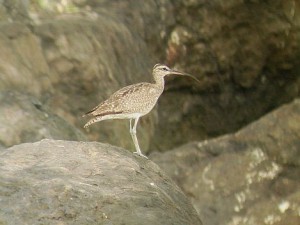