In the birding world, many of us are a list obsessed bunch. The lists other people use are temporal and pretty much inconsequential; a nearly forgotten, crumpled note that mentions milk, bread, butter, flour, cereal, mahi mahi (for those of us lucky enough to reside where this fish is standard) and other essentials like snickers bars and salt.
For birders, though, lists often play a principle role in one’s life. Lists of birds that is. Aside from the all important life list,  there is also the yard list, the wish list (similar to but not quite the target list), the day list, the state list, the country list and so on. There is also a year list. This latter list is not to be confused with a BIG YEAR though; the endeavor or madness that I am doing/carrying out/attempting in 2009. Oh yes, I need to clarify that I am doing a BIG YEAR  for Costa Rica. That is to say, I am striving to identify as many species as possible within the territorial boundaries of Costa Rica. This is different from a year list because that would be simply keeping track of all species identified.

To truly be recognized as a BIG YEAR, I think one has to make serious efforts to see EVERYTHING. For example, if that means that I will have to waltz around in the middle of the cold and windy nights in the high mountains while monotonously whistling like an Unspotted Saw-whet Owl then so be it! One has to do what one has to do for a BIG DAY or BIG YEAR. It’s going to be especially challenging because I work a weekday job in a birdless environment (birds have not evolved to occupy office space) and most of all because I have a 6 month old daughter but I am giving it a shot. “Giving it a shot” means that I might not only have to do that waltzing and Saw-whet sans spots whistling but also take a trip to the Osa, bird near the Panamanian border on both slopes, hit Palo Verde, Cano Negro and Guanacaste, bird migrant hot spots, probably take the Puntarenas ferry several times and carry out other as of yet unknown birding missions. At least Costa Rica is a small country and you can get to just about everywhere. One thing I won’t do is carouse around the open ocean chumming for pelagics. Pelagic birds are super cool but seasickness isn’t and I get roaringly sick out on those darn waves. At least I can handle that Puntarenas ferry though and that will probably give me a few pelagic or semi-pelagic birds.

Although I haven’t been able to get out too much as of late February (and I need to because its going to rain from May to December), I have broke 300 species. My best bird so far is Tiny Hawk! This a good one because even though they are around, you can hardly plan on seeing one. I got lucky with a glimpse along the La Selva entrance road. We were attempting to locate some hidden Tanagers that were giving alarm calls when this thrush sized bird with blunt head and tail barring burst out of a palm to fly across the road and out of site. Yep, typical Tiny Hawk experience.

I hope to up the BIG YEAR list soon with some rare migrants along the Caribbean coast during March and April. I will keep you updated with that and good birding to all in 2009!

All owls are very cool birds. If Fonzie was a birder he would give a resounding two thumbs up, “Aaaeeyyyyy” for Owls. They are way up there on the bird coolness scale because:

1. They are raptors: All raptors are automatically cool; even Common Buzzards and Red-tailed Hawks.

4. We hardly even see them even where they are common.

Of the 16 species of owls that have occurred in Costa Rica, the Black and White Owl is one of the most stunning. Like its name says, it is as black and white as an oreo cookie. It also has an orange bill and legs to brighten thing up. 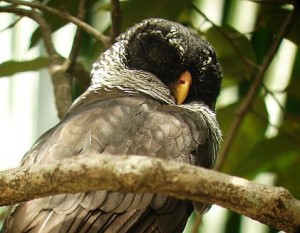 They occur from the lowlands to middle elevations (1,500 meters) and are mostly found in humid forested areas. A bird of the forest interior as well as forest edge, their distribution is probably limited for the most part by availability of large trees for nesting and their main food source; large insects bats. Here is a link to an article that describes how Black and White and the related, similar sized Mottled Owl avoid competition by food source. In short, the Mottled takes rodents while the Black and White sticks to bats. Black and White Owls are sometimes seen around streetlights located near primary forest or old second growth. They might prefer microhabitats where it is easier to catch bats. Places like tree-fall gaps and forest edge. In fact, the only places I have heard and seen Black and White Owls at night are in just such situations such as the soccer field and buildings at OTS (open areas surrounded by old second growth), and at streetlights adjacent to old second growth at nearby Selva Verde and Puerto Viejo de Sarapiqui. Where I have seen Black and White during the day, though, is where 1,000s of people (birders and non-birders alike) have seen Black and White Owls; at the main plaza in Orotina.

The plaza owls and their offspring could be the most frequently seen owls in the world. 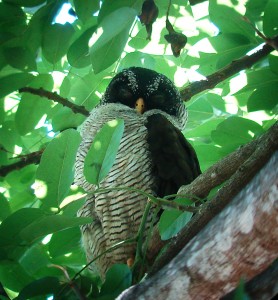 Orotina is a small town in the hot, humid foothills of the central Pacific slope. Not far from Carara, the surrounding area hosts some humid forest and dry forest species. The main plaza is like other plazas in Costa Rican towns; busy and noisy, a meeting place for everyone in town under the shade of several large trees. Despite all of the people activity, it has also hosted a pair of Black and White Owls since at least 1998. They can be found roosting in any of the trees and can be surprisingly difficult to find. The quickest way to see them is to ask the plaza ice cream vendor, “Victor Hugo”. He may have been the first person to find the owls in the plaza. He usually knows where they are and might also attempt to sell you real estate as happened on my past visit. Even if you don’t want to buy land and become an Orotinian, at least buy an ice cream or “shaved ice” from him if he shows you the owls.