If you have emailed me lately and had to wait for a reply, I apologize. For the past two weeks, I have been spending a lot less time with the computer and a lot more time with the birds. On March 3rd, a friend of mine came on down for two weeks of the best kind of birding- nearly non-stop. During this two week marathon of birdiness, we visited the Arenal area, Medio Queso, Carara and Cerro Lodge, took the ferry, La Gamba, Talari, Cerro de Muerte, Catarata del Toro, Tirimbina, and Braulio Carrillo (El Tapir and Quebrada Gonzalez). The end result was more than 500 species identified, several 100 plus species days, and pretty much fantastic birding every day.

This trip was also a birding blast because Alec and I had already birded Costa Rica 20 years ago, using buses and seeing some great stuff in the process but also missing out on the Osa and some other out of the way sites. We made up for that this trip with point blank looks at the likes of Black-cheeked Ant-Tanager, Mangrove Hummingbird, White-crested Coquette, etc, and so on. Alec also hardly recognized Costa Rica compared to his last visit but the birds still came fast and furious.

Some highlights and remarks:

39 species of Hummingbirds: We actually could have gotten a few more but spent very little time in the dry northwest (and thus missed out on Canivet’s Emerald and Plain-capped Starthroat), saw very little of hanging Heliconias for chance at sicklebill, didn’t have much flowering around La Gamba that might have given us Veraguan Mango and Sapphire-throated Hummingbird, and just plain out dipped on the lancebill and Blue-chested. However, with 39 other species, we weren’t complaining! White-crested Coquette showed nicely at Talari after a quick female at La Gamba. 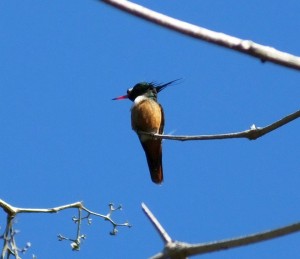 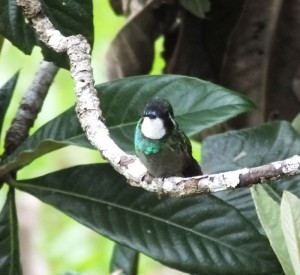 Catarata del Toro also produced as expected with our only Black-bellied, and the final day of birding gave us 3 male Snowcaps at El Tapir and then one male Black-crested Coquette at close range. 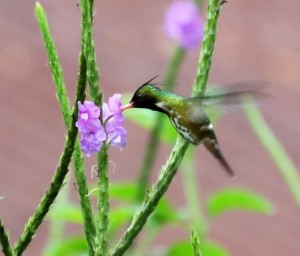 Puffbird sweep: We were really happy about this (how could you not be?)! The puffbird fest began with the rarest of the bunch, the good old Lanceolated Monklet. Looking like a stuffed animal, one showed at a reliable spot on the Fortuna Waterfall Trail. A major bonus right at the start of the trip. 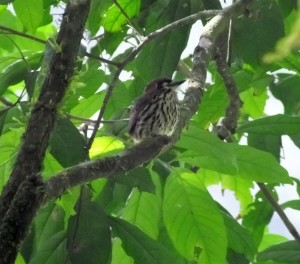 The puffbird party continued with a White-necked at Cerro Lodge of all places. First time I have seen the species there and perhaps moving in as the reforestation process has moved forward. 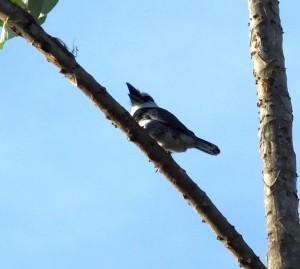 White-necked Puffbird- we had fantastic looks at two right in the garden.

Next on the list was White-whiskered at Carara (we also had it on the Fortuna Waterfall Trail. Expected but never guaranteed, we had great looks at two or three on the HQ trail. 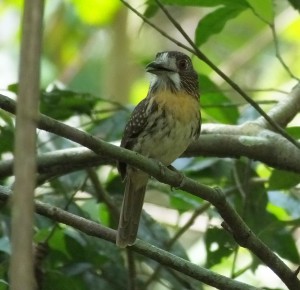 The nunbird was next and since we missed it at Arenal, we had to wait until our final days at Tirimbina to see if we could connect. We did and enjoyed their rocking display on the Ceiba Trail. Try as we did for the last puffbird, we couldn’t find it around Tirimbina nor La Selva. On a whim inspired by hopes for a puffbird sweep, on our last morning, we paid a quick visit to a spot en route to El Tapir. The stop paid off when a Pied Puffbird showed at the top of a tall, bare tree!

30 raptors (including vultures, falcons, and the Osprey): We actually missed out on a few but given the scarce raptor rule in Costa Rica and two weeks to work with, our total was nevertheless respectable. Highlights were great looks at Ornate Hawk-Eagle on the Arenal Peninsula Road, hearing it at least two more times elsewhere, close flyby looks at Barred Hawk at the Fortuna Waterfall, Great Black-Hawk at two sites, Pearl Kite, and more. 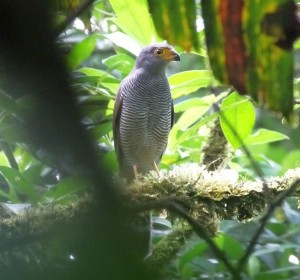 Including this Barred Forest-Falcon on the last day.

Hanging out with tinamous: Weird, wonderful football-shaped birds with beautiful voices. How can you not like hanging out with tinamous? The problem is that most don’t feel like hanging with humans. That seemed to change at Tirimbina when a few Great Tinamous spent time with us at an antswarm. These birds were so tame, they refused to leave even when German tourists stopped and discussed the trail map on several occasions. One guy also pointed at the tinamou and loudly proclaimed his sighting of a chicken.The tinamou was unfazed and went after a piece of apple that I tossed to it (yes, it actually did eat a piece of apple and yes, that German guy really did yell “chicken” in German while pointing at the tinamou). 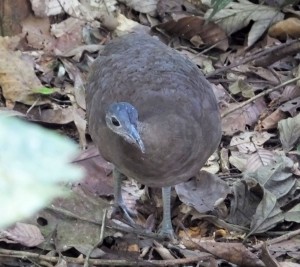 At Tirimbina, we also got crazy lucky with a close Slaty-breasted Tinamou (if Ron, Dollyann, and Dev read this, yes, we will be checking at that spot!). 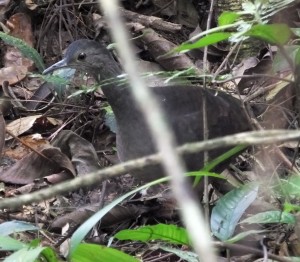 Great Curassows also played, especially at La Gamba. No, not a feathered football but still kind of crazy. 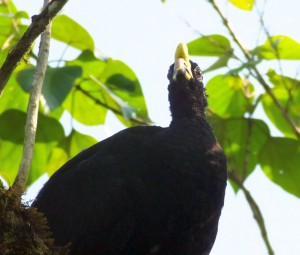 This male called from a roadside tree.

Owls: Six species seen and one more heard was a fine total. La Gamba treated us the best with great looks at Striped and Tropical Screech one night, and Spectacled and Vermiculated Screech the next night. 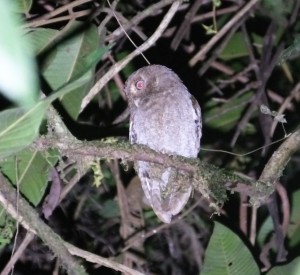 This “Vermiculated Screech” was giving a short call over and over.

A thick-knee and a few crakes: Several thick-knees showed far and then super close on the lower part of the Cerro Lodge road. We didn’t do amazing with crakes but still managed looks at Uniform at the famous Bogarin trail, White-throated seen in the Arenal area, and Sora seen (finally got that one for Costa Rica!) at Medio Queso. Of course we also had plenty of looks at Gray-necked Wood-Rail. 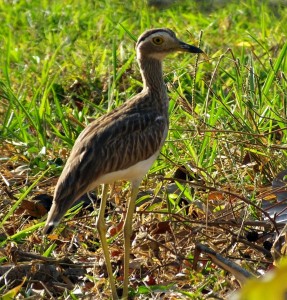 Senor thick-knee (or fat-ankles if you wish).

Trogons, motmots, and almost all of the woodpeckers: We saw trogons quite often including several Baird’s. Dipped on lattice-tailed and were never in range for Elegant but saw all of the rest including singing quetzal and other birds super close. Motmots treated us well too with Keel-billed at Arenal and all others except for Tody. We got all of the woodpeckers and good looks at them too except for the sapsucker and somehow never even heard a Pale-billed! That Pale-billed miss was the biggest bird surprise of the entire two weeks. 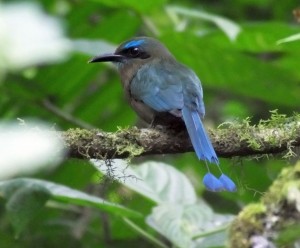 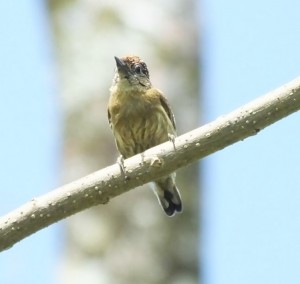 We also had several Olivaceous Piculets.

Antbird happiness: Our first day at Arenal was one of our best, especially because we got onto a roadside antswarm early in the morning. Close looks at Spotted, Bicolored, and even Bare-crowned Antbirds is always a damn good way to start a day of birding. 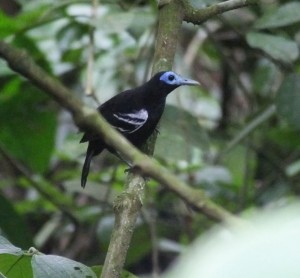 We also had Ocellated there, later that day, and then amazingly close birds at Tirimbina. 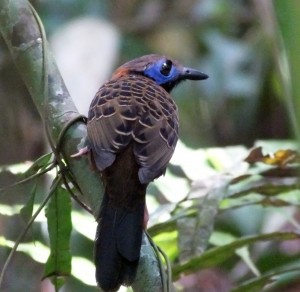 This Ocellated was as friendly as the tinamou.

Streak-chested Antpitta: Nope, not at Carara but at Quebrada Gonzalez and it was a super friendly one! 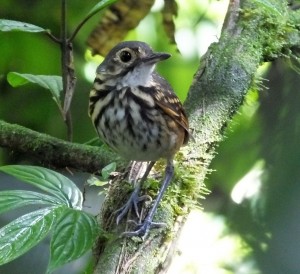 A whole mess of oscine passerines: While they are indeed the most speciose bunch of birds, we still saw more then expected. Nicaraguan Seed-Finch, Nicaraguan Grackle, the junco, Timberline Wren, lots of Golden-winged Warblers, Townsend’s Warblers, and other were all highlights as were the close looks at various tanagers at the San Luis Adventure Park. 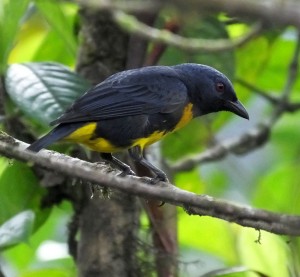 Blue and gold was nice. 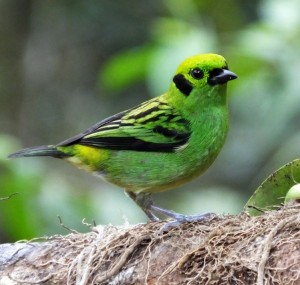 The close looks at Emeralds were priceless.

It was a whole mess of birds in just two weeks and my year list is now up to a healthy 581 species for Costa Rica. Our totals also hint at the incredible biodiversity found in Costa Rica. Come on down, bird a lot with a good guide, and you will see a lot!

If you are a birder in Costa Rica, of course you want to see a tinamou or two or three! Tinamous are the weird Neotropical equivalent of a cross between a grouse, quail, and football. Most have whistled vocalizations that tend to be a blend of haunting and beautiful. However, those sounds can also be a musical font of frustration because we hear tinamous so much more often than seeing them. Although Amazonia is pretty much tinamou central, we do have our fair share in Costa Rica. Five species occur in the country, and access to protected forests makes it easier to see these weird birds here than many other places.

Here are a few tips on the best places to see each tinamou species in Costa Rica:

Great Tinamou: This one is fairly common but very shy where there is even a hint of hunting. Yeah, licensed hunting is illegal in Costa Rica but as far as I can tell, hunting for food in non-protected areas is not so you can forget about seeing tinamous and curassows in most non-protected areas. Fortunately, there is enough easy access to forests with Great Tinamou to give good chances at actually laying eyes on this bird. Carara National Park is probably the best place because the birds are tame and always somewhere out on the Quebrada Bonita trail. La Selva comes in at a close second for the same reasons. Other forests in Sarapiqui are also suitable (Selva Verde and Tirimbina), as are any well protected sites in other parts of its range. 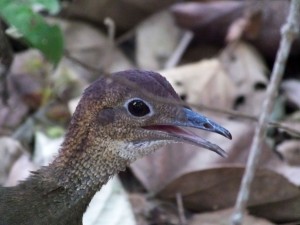 Needless to say, Carara is a good place to get pictures of this normally shy species.

Highland Tinamou: Costa Rica is very likely the easiest place to see this cloud forest tinamou anywhere in its range. Although it can turn up at Tapanti, and I have heard it on Poas, the most reliable sites are the Santa Elena and Monteverde reserves. Quietly walk the trails and you might see a Highland Tinamou. 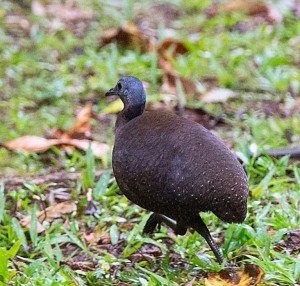 A Highland Tinamou scurries away. This rare image was taken by Birdquest guide Dani Lopez and is on the Costa Rica Birds Field Guide app.

Thicket Tinamou: This dry forest species can be heard at several sites but the most reliable sites that come to mind are these national parks: Santa Rosa, Rincon de la Vieja, and Palo Verde. The last one on this list is especially good for this species.

Slaty-breasted Tinamou: This species seems to be decidedly more rare in Costa Rica than sites further north. However, if you want to see it, your best bet is the Sarapiqui area. Carefully bird Tirimbina, Selva Verde, or La Selva and you have a fair chance at this one. I have also had it at Quebrada Gonzalez, El Tapir, El Zota, and a few other sites but it seems more rare at these places than Sarapiqui.

Little Tinamou: Pretty common but a real pain! This small, shy tinamou prefers thick second growth and rarely comes into the open. It occurs in lots of places, the best way to see one is by tracking down a calling bird, finding a spot where you can see into the understory, and waiting for it to walk into view. Or, you could also visit Bosque del Rio Tigre and watch one visit the garden!

Good luck with the tinamous in Costa Rica. A side benefit of watching and waiting for them to show is seeing other shy birds that also make an appearance.