Bird names run the gamut from the highly descriptive (Rose-breasted Grosbeak) and evocative (Scale-crested Pygmy-tyrant) to the plain and simple (House Sparrow or Common Swift). In Costa Rica, one very common species even has a name that sounds downright pitiful; the Paltry Tyrannulet. Despite valiant attempts by Stiles and Skutch to change its name to Mistletoe Tyrannulet, a more upbeat, and accurate title evocative of sleighbells and frightening advances from egg-nogged partygoers, the ornithological powers that be still appear to support the repression of this little guy. I mean how many birders really want to see something whose name is synonymous with insignificance especially when it has contenders with fancy marketable titles like the smart and curious sounding Black-capped Pygmy-tyrant, the circus-like Northern Bentbill or that paparazzi magnet the Royal Flycatcher? Possibly Costa Rica’s most ignored, overlooked species, I have been witness to such shameful behavior by birders from the hot buggy lowlands all the way up to the misty highland forests of the Talamancas. It’s always the same story; the Tyrannulet calls over and over begging to be seen in just about every possible habitat BUT NOOOO it’s easier to stare at the soaring vultures, more tempting to train your binoculars on Acorn Woodpeckers, to run down the road after a Gray-necked Wood Rail (well, those do look pretty spiffy). Sure the Tyrannulet is small and hard to see in the canopy and looks like a small gray warbler-like thing but that doesn’t mean we shouldn’t try to find it, take a shot at identifying it. Sure its short monotone call doesn’t sound too inviting nor as interesting as the hauntingly beautiful songs of Solitaires, the ancient tremulous tones of Tinamous or the staccato auditory attack of the Tapaculos but that doesn’t mean we should take our cue from Simon Cowell (“I found it forgetful, boring, downright paltry”) and dismiss the P. Tyrannulet. As insignificant as it might look and sound, the behavior of this spunky little guy is far from boring and since it is one of the most common species in Costa Rica, the P. Tyrannulet should be watched for and learned. Stiles and Skutch weren’t kidding around when they proposed “Mistletoe Tyrannulet” for this flycatcher species. This flycatcher, instead of sallying out for prey like a kingbird, mostly eats mistletoe berries! Yes, a flycatcher that feeds on fruit! Not only that but the P. Tyrannulet looks like a warbler and acts like a warbler; in addition to feasting on mistletoe berries, it gleans the vegetation for arthropodic delights and cocks its tail up like a Chestnut-sided Warbler (another common species often found with the P. Tyrannulet). So, don’t be fooled by its name, the P. Tyranulet is a bird worth watching and will be found at every site you visit in Costa Rica.

Here are a few photos of the not so Paltry Tyrannulet: 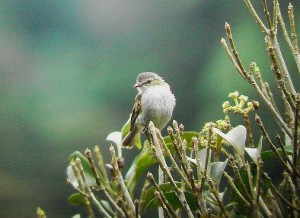 Although lighting can affect how color is perceived, the shape stays the same. 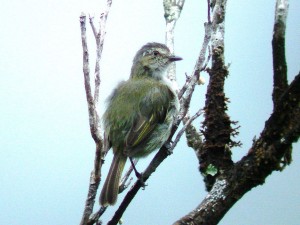 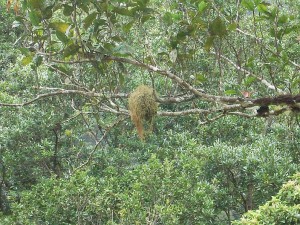